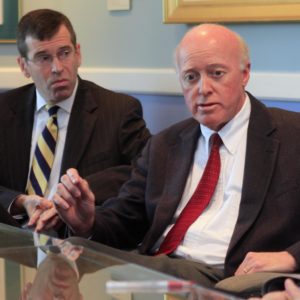 That “the effort to replace” talk is a euphemism for “Colin Van Ostern and the people pushing his candidacy.”  The fact that these governors, Democrat Lynch in particular, would sign their name to this publicly shows how high they believe the stakes to be.

The governors also make several references to NH’s #FITN primary and how vital Gardner has been to preserving it. Van Ostern responds that the First In The Nation primary status is written into New Hampshire law and, therefore, any Secretary of State is required to uphold it.

“It’s short-sighted for anyone to suggest threats to the primary as a way to score political points when there is actually a strong bipartisan tradition of protecting it fiercely and a crystal-clear state law to back that up,” Van Ostern said.

As another bipartisan group, Steve Duprey and Terry Shumaker, recently released a joint letterendorsing Gardner and recounting specific actions he took to save the FITN primary when it was at very real risk–particularly in 1996 and 2004.

And then there’s this comment, made in passing recently by former Obama advisor Dan Pfeiffer:

“The DNC has played with the primary calendar multiple ways this century and yet Iowa is still kingmaker. Victory in Iowa propelled Al Gore, John Kerry, Obama, and Hillary Clinton to their nominations…If you can win in Iowa, you can win the White House.”

If Iowa is the Democrats’ “kingmaker,” South Carolina is the GOP’s. Who needs New Hampshire? At least, that’s the argument many in the two parties will continue to make.

As NHJournal has reported, there are significant demographic reasons why Democrats might want to move their first primary away from New Hampshire. The focus on identity politics in the 2018 midterms bring those arguments to the fore. And given President Trump’s relatively poor position, in a state with a weak state party, there are plenty of Republicans who wonder whether it might be smarter to go straight to South Carolina, or out west to Arizona.

There are so many forces at play that undermine the case for the NH #FITN primary that it may be beyond saving past 2020. But having an untested partisan Secretary of State, one whose candidacy is seen even by some Democrats as part of a political power play, isn’t likely to help.