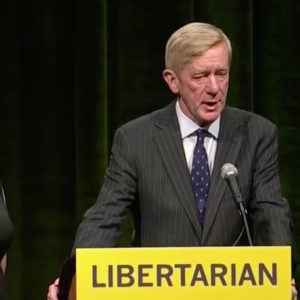 If you’re a 2020 GOP primary voter who’s been holding out for a pro-abortion, pro-amnesty liberal who endorsed Barack Obama, praised Hillary Clinton and compared Donald Trump to the Nazis — Bill Weld’s your man!

And if you’re Donald Trump, concerned that a primary challenge could cripple your re-election bid the same way it did for George H. W. Bush or Jimmy Carter, former Governor Weld really is your man.

He’s the ideal candidate for Trump to run against.

Weld, the Libertarian Party nominee for vice president in 2016, will be speaking at the Politics and Eggs breakfast in Bedford, NH Friday morning, where it is expected he will make a major announcement related to a possible primary challenge to President Trump.  “We’re going to make news,” Weld told Jim Brett, head of the New England Council which, along with the New Hampshire Institute of Politics, co-hosts the event.

Even across the border in New Hampshire, the former Massachusetts governor is hardly a household name. That’s not surprising given that the last time he held public office was during the Clinton administration.

In the latest NHIOP poll released earlier this week, when Republicans open to a primary challenge to President Trump were asked to name a possible candidate, the most common name was former Ohio Gov. John Kasich, with Sens. Marco Rubio and Rand Paul making the list. At least two people even suggested Fox News star Tucker Carlson or radio host Ben Shapiro.

How many mentioned Bill Weld?

That can change, of course.  If Weld starts stumping across the Granite State, his numbers will no doubt go up. With a little money and help from the media, who are already playing up his long shot bid, Weld could become the face of the anti-Trump resistance inside the party.  Which would be great news for President Trump.

The Trump White House is clearly nervous about a serious primary challenge, as they should be. Three incumbent presidents have faced such challenges since 1968 (LBJ, Carter and GHWBush) and and none of them were re-elected.

“I think Weld opens the door to someone else, which is why Corey Lewandowski and Steve Stepanek reacted so strongly and negatively,” one longtime NH GOP strategist told NHJournal.  Lewandowski, a top figure in Trump’s 2016 campaign called Weld an “opportunist who’s grown up with immense privilege his entire life and just wants to stay relevant,” while NHGOP state party chairman Stepanek said “We don’t consider him a Republican. We don’t want him back.”

As of today, that’s not really an issue. The odds of President Trump being seriously threatened in a primary are low. Nationally, his poll numbers have recently bounced back, close to his post-inaugural high of 45 percent approval, and Republicans have rallied around him during the government-shutdown fight. In the most recent NHJournal poll, Granite State Republicans gave Trump an 80 percent approval rating. Perhaps more significant, only 10 percent disapproved of his performance. The poll was taken during the height of the government-shutdown crisis.

In the latest NHIOP poll, 77 percent of local Republicans said they would encourage Trump to run again in 2020, and 40 percent said his performance during the border wall/government shutdown fight improved their opinion of him.

“A legit GOP contender won’t get in now,” one longtime NHGOP operative told NHJournal.  “They’ll get in after Mueller comes out and they will go all in mid-summer.”

And even if Trump’s fortunes suddenly fell, if he were indicted or some other outside event changed his standing among Republicans, there is no evidence that the GOP primary electorate wants to move to the Left.

“None,” says Bevan. A December Gallup poll found that rank-and-file Republicans want their party to become even more conservative rather than moderate by a 57-37 percent margin.

GOP consultant Greg Mueller, who worked on both the Pat Buchanan and Steve Forbes GOP primary campaigns, tells NH: “This is not Bush versus Buchanan in ‘91 where the President and leader of the party is breaking promises and imposing liberal policies. From a policy standpoint, Trump has been one of the most conservative presidents in a generation.”

The theory some anti-Trump Republicans are currently working from is that a viable challenger has to come from Trump’s own, populist wing of the party, somebody who shares many of Trump’s policy positions.

And that is not former Massachusetts governor Bill Weld.

Even in a state known for liberal Republicans, Bill Weld stands out as someone far from the party’s conservative base. He’s not just pro-choice, he gave a speech at the 1992 Republican convention attacking the pro-life wing of the party. He’s not just pro-amnesty, he supports a major increase in immigration and has repeatedly compared Trump’s immigration stance to Nazi Germany.

“I can hear the glass crunching on Kristallnacht in the ghettos of Warsaw and Vienna,” Weld said of Trump’s immigration rhetoric.

Many Trump supporters believe that the GOP elites share the same view of them as racist “deplorables” as Hillary Clinton. Weld has gone out of his way to confirm that view, attacking Republicans and their party as “intolerant.” When he officially switched to the Libertarian Party in 2016, Weld said he felt “free.”

“I’ve been running for office for 20 years carrying around the Republican Party’s social policies like a 30-pound weight on my back.”

Not only was Weld openly pro-Hillary during the 2016 campaign (despite the fact that he and Gov. Gary Johnson were theoretically running against the Democratic ticket, too) he also bragged afterwards about the damage the Johnson-Weld ticket did to the Trump campaign.

Writing in the Washington Examiner, former Delaware GOP state chairman Tom Ross told of running into Weld in DC during the inaugural parade. “Governor Weld brought up a fascinating point…Johnson-Weld internal polling showed that 75 percent of their voters would have voted for Donald Trump had they not been in the race. The Libertarian ticket received nearly 4.5 million total votes in the election,” Ross wrote. “In short, if the Johnson-Weld ticket had not run, Donald Trump would have won the popular vote….In addition, Mr. Trump would have rolled up an even larger Electoral College margin, as the additional votes would have likely flipped New Hampshire, Maine, and Minnesota to his column.”

So Weld’s plan is to run in New Hampshire as the 2020 Republican candidate who helped Hillary Clinton carry the state in 2016?

All of which confirms the view of many GOP strategists that, as a candidate, Weld is no threat to Trump. However, he could hurt the fortunes of a future Republican challenger who has the conservative bona fides to attract GOP support, but winds up being lumped in with Weld.

As one longtime NHGOP activist told NHJournal, if Weld becomes the face of the anti-Trump resistance inside the GOP—a liberal, Trump-bashing elitist with no loyalty to the party—“Trump’s team will use him as a weapon to beat up future challengers, to dismiss them all as ‘just another Bill Weld.’”

Not everyone agrees. Some Republican strategists believe Weld’s entrance will do more good than harm to the anti-Trump effort inside the GOP by breaking the ice. But all agree Weld isn’t a serious threat.

“I assume Weld is running in hopes that a Democrat beats Trump in the general election and he is appointed as ambassador somewhere,”  says Spencer Kimball, executive director of the Emerson poll. “Maybe New Zealand. Isn’t that where Trump sent Scott Brown?”