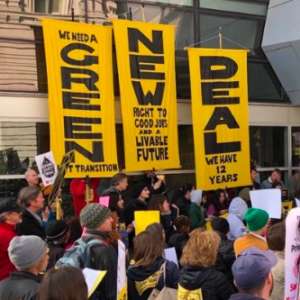 NY Senator and 2020 POTUS candidate Kirsten Gillibrand has joined the chorus of high-profile Democrats announcing their support for the “Green New Deal,” an aggressive (and expensive) proposal to de-carbonize America’s economy.

“The way I see a green economy is this: I think we need a moonshot. We need to tell the American people ‘we are going to have a green economy in the next 10 years, not because it’s easy, but because it’s hard, because it’s a measure of our innovation and effectiveness,’ ” she said on the liberal “Pod Save America” podcast this week.  Her spokesperson told reporters on Tuesday that this is merely a reaffirmation on her previously-held position.

“Senator Gillibrand supports the Green New Deal concept and has been working for years on policies to aggressively combat climate change, protect our environment and create a green economy in communities that have often been left behind,” Gillibrand spokeswoman Whitney Brennan said.

But while Gillibrand, Sen. Elizabeth Warren, Bernie Sanders and Beto O’Rourke support the Green New Deal, some other big names are holding out:

The Sierra Club, the Natural Resources Defense Council, the Environmental Defense Fund, and the Audubon Society.

When more than 600 green activist groups joined together to send out a letter demanding public officials support the Green New Deal, six of the largest and most respected environmental organizations declined. And according to the New Republic, “Two green groups founded by deep-pocketed Democratic celebrities are also absent: Al Gore’s Climate Reality Project and Tom Steyer’s NextGen America.”

Why would establishment environmentalists like the Sierra Club and more radical actors like Tom Steyer decline to support a cause embraced by Rep. Alexandria Ocasio-Cortez?

“Speaking on background some said the letter did not allow for enough flexibility on the details of a Green New Deal,” the New Republic reports.  They objected to requiring signatories to oppose “market-based mechanisms and technology options such as carbon and emissions trading and offsets, carbon capture and storage, nuclear power, waste-to-energy and biomass energy.”

And then there’s the cost. While no definitive numbers exist, one estimate puts the cost of building the electrical generation capacity required alone at $2 trillion. And that doesn’t include the trillions in costs from mandating an end to all gas-powered vehicles, ending all oil exports and entirely shutting down America’s oil, gas and coal production.

In other words, the extremism of the Green New Deal is a step too far even for Al Gore. And, perhaps, Sen. Kamala Harris.

Despite calls from green activists like the Sunrise Movement–famous for organizing protests outside Speaker Pelosi’s office on the first day of the new Congress– the California senator has thus far declined to fully endorse the GND.

Harris’s spokesperson says the Senator is on board for the “goals of the Green New Deal,” but that doesn’t appear to be enough for the green movement in general.

“Having presidential candidates say they are supportive of the concept of doing something like the Green New Deal is amazing, but it’s not sufficient,” Saikat Chakrabarti, chief of staff to freshman Rep. Alexandria Ocasio-Cortez, D-N.Y., told the Washington Examiner.