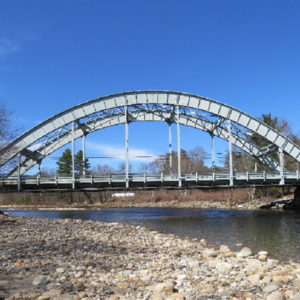 The Green Bridge in Woodstock, N.H.
[IS] Opinions

ANALYSIS: Biden’s Visit a ‘Bridge to Nowhere’ for NHDems

President Joe Biden picked New Hampshire as the first stop on his national tour to promote the $1.2 trillion infrastructure spending package. Based on the polls, he’s not doing local Democrats any favors.

“The bill I’m about to sign is proof that despite the cynics, Democrats and Republicans can come together and deliver results,” Biden said at Monday’s White House signing ceremony. The spending proposal garnered the votes of 19 Republicans in the U.S. Senate, 13 in the House, and is polling well with the general public. A new ABC News/Washington Post poll finds 63 percent of Americans support Washington spending $1 trillion “on roads, bridges and other infrastructure.”

Unfortunately, just 41 percent of Americans in that same poll approve of the job Biden is doing in office. Among independents, 45 percent strongly disapprove. And about 50 percent of suburban voters give Biden a “thumbs down,” too.

In swing states like New Hampshire, the numbers are even worse. When ABC News looked at results in the eight states believed to have the most competitive U.S. Senate races, including New Hampshire, they found Biden’s overall job approval rating was a dismal 33 percent.

Biden’s numbers are killing the polls for the rest of his party. As ABC News reported last weekend, the GOP’s 10-point margin in the “generic ballot” question is the largest in the 40 years the network has asked the question. 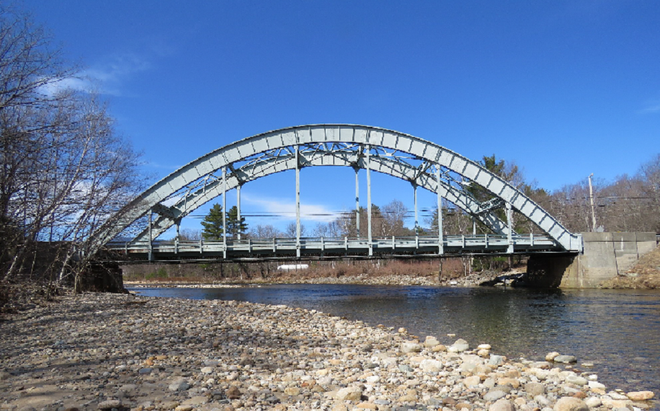 The Green Bridge in Woodstock, N.H.

One of the Democrats being hurt by Biden’s sagging polls is Sen. Maggie Hassan, who’s expected to appear with Biden when he stops by a bridge in Woodstock, N.H. to promote the trillions in spending Democrats have passed so far this year. In last month’s poll from the New Hampshire Institute of Politics, Hassan had a 44 percent approval rating — identical to Biden’s.

By comparison, independent Democrat Sen. Joe Manchin, who hasn’t backed away from opposing some of the more progressive policies of his fellow Democrats, has an approval rating in West Virginia 28 points higher than Biden’s.

It’s just another data point in the growing evidence that Granite State Democrats’ performance in 2022 is likely to closely track that of the party as a whole. And every appearance by Biden will help more closely tie local Democrats like Hassan and U.S. Rep. Chris Pappas to the president and the national party.

Not everyone believes that is bad news.

“It is significant that President Biden has picked New Hampshire for his first stop after signing the infrastructure legislation,” veteran N.H. Democratic strategist Jim Demers told NHJournal. “It highlights the importance of bipartisanship, it’s been a long time since such a significant vote included the likes of Nancy Pelosi and Mitch McConnell.

“And the backdrop of the Green Bridge in Woodstock symbolizes one important aspect of the bill, funding for roads and bridges all across the country, many that have been in dangerous disrepair for years. Infrastructure has been talked about in Washington for a long time but you have to hand it to President Biden, he got it done.”

Hassan has tried to build on the bipartisan message, too. Her press releases are filled with the “B” word — sometimes four such press announcements celebrating ‘bipartisanship’ in a single day. But Hassan has largely voted with her party leadership, including on the latest trillion-dollar spending package. And there are already Democrat-funded ads touting her support for the “Build Back Better” social welfare/green energy policy spending proposal the House is expected to pass this week.

And then there’s that most problematic of questions around the president’s visit: What’s the point?

Partisans will debate the various elements of the bipartisan infrastructure bill Biden signed on Monday. But what do billions for roads, bridges, broadband and electric car chargers have to with the issues Granite Staters are actually worried about: inflation, energy prices and the worker shortage?

New Hampshire has among the highest percentage of homes heated by oil and propane in the nation. They’re looking at price hikes this winter of 50 percent or more. What is the Biden administration doing to drive those costs down?

New Hampshire has one of the lowest rates of unemployment and employers are running ads pleading for workers to return to the workforce. And Joe Biden is coming to New Hampshire to brag about spending billions to create even more competition for scare workers?

The same with inflation, which isn’t going to be helped by increased government demand for goods and services. That’s the Biden pitch?

Once again, this infrastructure spending may be needed. It may be a smart investment. But it’s almost entirely unconnected from the voters’ priorities of the moment. It’s as if your house is on fire, and Joe Biden pulls into the driveway in a new car he says was a great deal. It may be. But it won’t help put out the fire.

Hassan will be standing right by President Biden at the Woodstock Bridge. How is this a winning strategy in a state where Biden’s approval has collapsed and not a single elected Democrat has 50 percent statewide approval? Heading into a midterm election in which the GOP has record-setting polls?

“What else can she do?” a Granite State Democratic strategist told NHJournal. “Her fate is tied to Biden and the Democrats. It’s too late to pull a ‘Manchin.’ She has to count on the calendar — there’s still a year until the election.”

At least one Republican agrees. “A year is an eternity in politics,” says GOP strategist Tom Rath. “She’ll be tougher than folks think.”

She’ll need to be. The last time a GOP wave hit New Hampshire, the 2010 backlash to Obamacare, Republicans won the U.S. Senate and both House seats. Wildly-popular Democratic Gov. John Lynch held on with less than 53 percent of the vote.

And even Hassan’s biggest boosters concede: She’s no John Lynch.