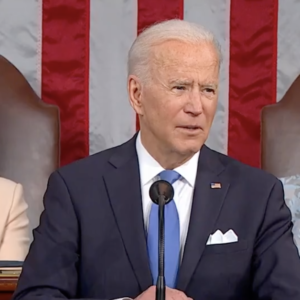 President Joe Biden presented Americans with a bold — and expensive — agenda in his address before a joint session of Congress Wednesday night, one with a price tag exceeding $6 trillion. Biden’s policies have earned the praise of progressives like New York Rep. Alexandria Ocasio-Cortez.

“The Biden presidency has definitely exceeded expectations progressives had,” Rep. Ocasio-Cortez said earlier in the day. “To be frank, a lot of us expected a much more conservative administration.”

New Hampshire Democrats like Rep. Chris Pappas and Sen. Maggie Hassan, on the other hand, greeted Biden’s proposals politely, but without enthusiasm. Perhaps because they’ve seen the power the tax-and-spend issue still has in New Hampshire.

“Tonight, I come to talk about crisis — and opportunity. About rebuilding our nation — and revitalizing our democracy. And winning the future for America,” Biden said.

Winning that future will be expensive. In his speech, Biden touted his “American Families Plan,” $1.8 trillion in new spending on taxpayer-funded universal pre-K ($200 billion), two years of tax-funded community college ($109 billion), and up to 12 weeks of paid leave ($225 billion).

Add that $1.8 trillion to the $1.9 trillion “COVID relief” package (less than 20 percent went to public health) and the $2.3 trillion “infrastructure” plan (less than 10 percent is traditional infrastructure), and the result has Republicans labeling President Biden the “Six Trillion Dollar Man.”

That’s what Sen. John Barrasso (R-Wy.) called Biden Wednesday. “The impact of Biden’s spending is $46,000 per household. That’s a heavy burden. We’re going to spend more money in the first six months of the Biden presidency than we spent to win World War II.”

Interestingly, Biden never mentioned how much he was “investing” in any of these programs in his speech. The only time he used the word “trillion” was to attack Trump’s tax cuts. He also pledged to raise taxes, though he said it would only be on “the rich.” Fact-checkers have acknowledged Biden’s mix of corporate tax hikes and changes to business taxes would, in fact, hit middle-class business owners, too.

That may play well in San Francisco and New York, but in the Granite State, fiscal issues still bite.

Last year, Republicans took control of the state legislature and won a blowout re-election for Gov. Chris Sununu, in part by campaigning hard on the message that Democrats wanted to raise taxes. It’s a fact not lost on Hassan or Pappas.

This may explain the tepid response Biden’s speech received from New Hampshire Democrats.

Sen. Jeanne Shaheen released a statement best described as subdued. “President Biden’s address tonight was a reflection of what we’ve collectively been through as a nation, but more importantly, where we must go,” the state’s senior senator wrote. “President Biden’s vision this evening built on the work accomplished in his first 100 days in office, including a new proposal that invests in the working family by addressing child care affordability, access to quality health care, early childhood education, and much more.”

Hassan’s response was even more modest.

“Tonight, President Biden spoke to the immense challenges that Americans have faced over the past year, discussed the strength and resilience of the American people, and outlined a path for a better future for families, small businesses, and our economy,” she said in a statement. “I appreciate President Biden’s commitment to creating jobs, supporting working families, and laying the foundation for the next generation of economic growth — and I look forward to reviewing his proposals.” (Emphasis added.)

Hassan said more about her (virtual) guest to the speech, Adam Hammill, owner of Exile Burrito in Berlin, than she did the speech itself.

And as for embattled Democratic Rep. Chris Pappas, he said…nothing. Two hours after the speech, the vulnerable incumbent hadn’t posted a single tweet or released a statement on his website regarding the president’s remarks.

The notable exception is Rep. Annie Kuster, who offered a full-throated endorsement of Biden’s agenda — in stark contrast to her fellow members of the New Hampshire delegation.

“The first 100 days of the Biden-Harris administration have been transformative for our country, and I believe the best is yet to come,” Kuster said. “Now, we are continuing those efforts to not only recover from COVID-19 but also to build back better — that’s why the American Jobs Plan and the American Families Plan are so important.”

Kuster endorsed specific elements of the Biden plan, something the rest of the delegation declined to do. In some cases, like Biden’s call for a federally-mandated $15 minimum wage, perhaps because Hassan and Shaheen had already voted against it.

Granite State Republicans, on the other hand, were more than happy to speak bluntly about Biden’s remarks.

“It took this administration less than 100 days to orchestrate a crisis of catastrophic proportions on our southern border, and now they are shamelessly campaigning for over $3 trillion in tax hikes on hardworking American families to pay off their cronies,” New Hampshire National Committeeman Chris Ager told NHJournal. “Each time Granite Staters think they have seen it all from Biden and Harris, their horrific policy rollout continues one radical blunder after another.”