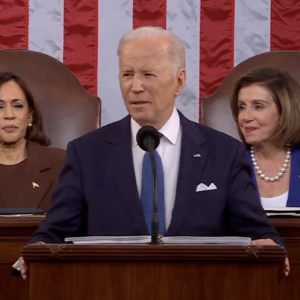 Biden’s SOTU: No Relief on Inflation, or for NH Democrats

Despite polls showing Americans believe the state of the union is dismal, a defiant President Biden insisted his first year has been a success, reaffirming his support for trillions in new federal spending and aggressive green energy policies.

It was a State of the Union speech that’s unlikely to give aid and comfort to New Hampshire Democrats facing a tough midterm election in November, or turn around Biden’s plunging polls.

After beginning with a tribute to the bravery of the Ukrainians in the face of the Russian onslaught, Biden launched a defense of his presidency and the spending proposals from the Build Back Better plan. That included hundreds of billions of dollars for green energy proposals, plus more taxpayer funding for childcare, healthcare and other social spending.

Veteran pol and Barack Obama advisor David Axelrod noted on Twitter, “Hard to avoid making a SOTU speech sound like a laundry list. The Tide did not turn tonight.”

More significant for Biden’s fellow Democrats, he didn’t turn the tide on messaging regarding inflation. While polls show soaring costs are by far the top concern of voters, Biden only mentioned it a handful of times. It wasn’t a key part of his speech, and he didn’t offer any proposals to end it. Instead, he said the government should spend more money helping Americans offset higher prices.

“I have a better plan to fight inflation, lower your costs, not your wages,” Biden said. “Economists call it ‘increasing the productive capacity of our economy.’ I call it building a better America.”

“If you’re Maggie Hassan or Chris Pappas this night, you’re wishing the President had stopped speaking right after all the anti-Russian/Pro-Ukrainian applause lines,” said GOP strategist Patrick Griffin. “The longer Joe Biden rambled, the more New Hampshire voters were reminded that his policies — supported almost 100 percent by Hassan and Pappas, are exactly wrong.

“So, the notion of a unifying speech that would bring the country together at a difficult time? Not so much,” said AFP-NH state director Greg Moore. “Instead, it’s a laundry list of socialist ideas that are going nowhere. Get ready for a bloodbath in November.”

“Brilliant speech that exceeded expectations,” said veteran Democratic strategist Bob Shrum, director of the Center for the Political Future at the University of Southern California. “He addressed Ukraine, inflation, COVID. He could not have done better.”

And Sen. Maggie Hassan, whose approval rating remains nearly as low as President Biden’s, echoed his call for more federal spending. “I appreciated the President’s focus tonight on the work ahead to reduce prescription drug costs, lower oil and gas costs, and address child care costs,” Hassan said in a statement. “But we must do more to fix a broken system that has allowed bad actors to go unchecked and drive up the cost of basic goods from necessary medications to gasoline.”

Biden also blamed higher prices on greedy corporations “exploiting” markets and “driving up prices” and “announcing a crackdown on these companies overcharging American businesses and consumers.”

It’s not an argument most economists take seriously. As the left-leaning Washington Post editorialized:

“Economists across the political spectrum are rightly calling out the White House for this foolishness. Even some within the White House are questioning this approach, The Post reports.”

Biden also doubled down on green energy technology like wind and solar without any mention of expanding U.S. production of oil or natural gas. This is a blow to states like New Hampshire that rely on heating oil and propane and where home heating costs have soared 50 percent or more.

As Biden repeatedly declared his support for “Buy American” policies, Sen. Rand Paul (R-Ky.) tweeted: “You know who would like to Buy American right now? Europeans who need oil and gas and want to isolate Russia. But POTUS and climate extremists made sure they can’t do that.”

And a letter signed by Gov. Chris Sununu and 23 other Republicans called out Biden for sidestepping important issues.

“From the disastrous Afghanistan withdrawal, to deadly drugs flowing in through the open southern border, to halting efforts to make our nation energy independent, this Administration has put America on a path toward decline,” they wrote.