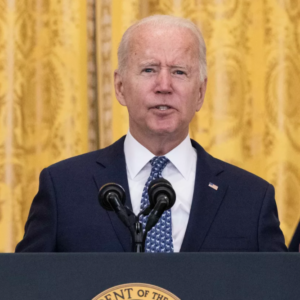 Over the past few months, we have watched as President Biden’s campaign promises have turned out to be little more than hollow words. Mr. Biden’s unraveling began with the calamity that was the Afghanistan pull out. I have written about this at length, but at its core the Biden promise was that Afghanistan would not fall into the hands of the Taliban. And even if it did, we would not leave any Americans behind.

We all saw how that turned out.

In order to distract Americans from the disaster that was (and is) Afghanistan, Mr. Biden turned to his next campaign promise: to get COVID under control. At the height of slumping poll numbers, Mr. Biden distracted the American public and media by issuing a sweeping unconstitutional mandate. Mr. Biden is threatening hardworking Americans with unemployment if they refuse to take the vaccine, and he has to date refused to offer an exemption, unless you work for the Post Office or Congress – and then you magically do not get or spread COVID.

Do not bother looking up to see who the postal employees’ union endorsed in 2020. You already know the answer. And of course, this kind of exemption is also par for the course for our Congressional Representatives.

But it turns out the mandate is not as popular as Mr. Biden hoped for. It is extremely popular with his Democratic base, which skews the top-line number. But when you look under the hood of public polling, you see that Independents and Republicans resoundingly reject being told that it is “the jab or your job.”

The unvaccinated Americans, for their part, have said they would rather lose their job than comply with Mr. Biden’s order. This isn’t a statement about the vaccine; this is a statement about what level the government gets to control your body. From the same party that chants “my body, my choice” in the street comes “take this vaccine, or your family starves.”

Finally, we have Biden’s promise to keep the border under control. Since he has taken office, Border Patrol has apprehended over 200,000 people per month conducting illegal border crossings. Why is this? Because immigrants are intelligent people and they know that Biden’s ‘promises’ to enforce the immigration laws are hollow and that it is now open season to illegally move to America. The mainstream media seems content not to cover the story, even though the ‘cages’ they covered during the Trump administration are now overflowing to a level never seen during the previous administration.

There is some good news, though, which is that as Mr. Biden continues to fail to deliver on his promises, the American people are waking up. His numbers are, well, horrible. He is underwater in New Hampshire by 11 percent, a state that elected him by 8 percent – a nearly 20 point negative swing.

I do not know what the future will bring for the Biden administration, but I do know this: if the last nine months have been any indication, then we can expect more empty and broken promises over the next three years as well.