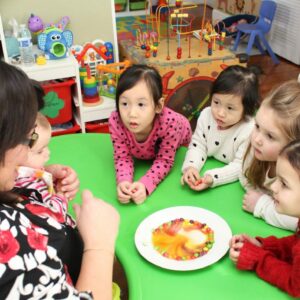 Hundreds of New Hampshire families could see their childcare endangered due to provisions in President Joe Biden’s Build Back Better spending plan that penalizes religious education.

The $1.7 trillion social safety net spending plan includes funding for early childhood education and childcare centers, a feature its booster are quick to tout. The White House pledges “universal preschool for all 3- and 4-year olds,” and taxpayer-funded subsidies to many families to keep child care costs “no more than 7 percent of income.”

However, the bill also places multiple mandates on childcare facilities that accept the funding. For example, they must raise the salaries of their workers to those commensurate with the average elementary school teacher in their area, which would mean more than doubling them in most cases. Economist Casey Mulligan at the University of Chicago estimates the bill’s regulations would raise costs by 80 percent.

And then there’s the bill’s bias against religious and faith-based daycare.

At issue is a provision mandating all providers comply with federal nondiscrimination statutes, which would end up excluding many child care facilities associated with religious organizations and churches.

Bevin Kennedy, the development and communications cabinet secretary for the Roman Catholic Diocese of Manchester, said that means the state’s six Catholic childcare centers could be left out.

“There are six Catholic childcare providers throughout New Hampshire that serve the needs of hundreds of families across the state. The Build Back Better Act in its current form contains new funding for pre-K services, but it makes it virtually impossible for many faith-based child care providers to participate in receiving these funds because of explicit obligations that numerous religions and faith communities cannot meet,” Kennedy said.

Last week, the United States Conference of Catholic Bishops, along with dozens of other faith-based groups across the religious spectrum, sent a letter to congressional leaders calling out the discrimination baked into the spending bill.

“The faith community has always affirmed that parents should choose the best environment for care and education of their children. The current Build Back Better Act provisions would severely limit the options for parents, suffocate the mixed delivery system for child care and pre-kindergarten, and greatly restrict the number of providers available for a successful national program,” the letter states.

The problem with the bill, according to the letter, is any organization that receives federal funding would be required to meet the federal government’s non-discrimination requirements, without any exemptions for religious groups.

Kennedy said the Build Back Better bill’s lack of a religious exemption is a change from past federal funding plans.

“Although the federal funding provision at issue has the laudable goal of increasing the availability of pre-K services, the measure is drafted in such a way that many pre-K programs cannot even participate,” she said.

Early childcare is vital to the many low-income Granite States families served by the church, as it allows parents to work to support their families, according to Kennedy.

“The Diocese of Manchester has serious concerns about these provisions, as our childcare centers are imperative to enabling many families to work, including many low-income parents or guardians providing for their families,” Kennedy said.

Churches and religious organizations provide a disproportionate amount of low-cost daycare for low-income families. As Mulligan points out, “churches and other faith-based institutions have a natural cost advantage in child care because church facilities would otherwise sit unused on weekdays, when the demand for care is greatest. Build Back Better would squander this advantage by financing capacity expansions only at nonreligious competitors.”

More than half of American families using pre-kindergarten and early child care services get their care through a religious-based organization or providers.