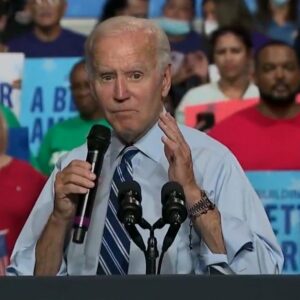 When President Joe Biden gave his inaugural address, he spoke of the need to “heal a broken land,” and promised “an American story of unity, not division.”

During a no-cameras event in Maryland with Democratic donors Thursday, Biden said  Trump supporters are embracing “semi-fascism,” and represent “a threat to our democracy.”

As Axios reports, Biden said the problem with the Republican Party is, “It’s not just Trump, it’s the entire philosophy that underpins the — I’m going to say something — it’s like semi-fascism.”

Biden added, “The MAGA Republicans don’t just threaten our personal rights and economic security. They’re a threat to our very democracy. They refuse to accept the will of the people. They embrace … political violence. They don’t believe in democracy.”

“Mr. Biden forced Americans out of their jobs, transferred money from working families to Harvard lawyers, and sent our country into a recession while families can’t afford gas and groceries. Democrats don’t care about suffering Americans – they never did.”

It was not the first time Biden has used divisive language to describe his political opponents. During the 2012 campaign, then-Vice President Biden told an audience of Black voters that GOP nominee Mitt Romney and the Republicans were “going to put y’all back in chains.”

In January, while promoting a federal election law to override state rules Democrats dislike, the president said opponents were on the side of notorious racists like Bull Connor and George Wallace. Biden’s position on the issue was opposed by members of his own party, including Sen. Kyrsten Sinema (D-Ariz.)

“He invoked the bloody disunion of the Civil War to demonize Americans who disagree with him. He compared a bipartisan majority of senators to literal traitors,” McConnell said.

Biden’s description of Trump voters as supporters of political violence or embracing “semi-fascism” was too much for even some Democrats to take. Rep. Chris Pappas, a Democrat facing a tough re-election campaign in a New Hampshire swing district, said, “I don’t think that kind of rhetoric is helpful.”

Matt Mowers, who faced off against Pappas two years ago and is running in the NHGOP primary for another shot, said Biden’s comments were straight from the Democrats’ playbook.

“Remember when Hillary called us deplorable? The disdain from Joe Biden & Maggie Hassan only further divides us. These comments are unacceptable from the President and Maggie Hassan should do the right thing and condemn him for insulting Granite Staters like me.”

Biden has also shown his willingness to play hardball with Republicans over the president’s $300 billion plan for a one-time college debt bailout. When Republican lawmakers complained about Biden shifting the costs of college degrees onto working-class taxpayers who didn’t attend college, the White House responded by tweeting the amount of PPP loans received by these members’ businesses.

It’s a comparison that outrages critics of Biden’s student debt write-off plan, who say it’s insulting to business owners forced to shut down their businesses during the COVID-19 lockdowns. The PPP funding was pushed on businesses to keep them making payroll at the federal government’s request. That’s very different from people who chose to apply for loans to pay for a college degree, critics say.

One of the members of Congress targeted by the White House over using PPP called it “another ignorant attack from a career politician who has never created a single job.”