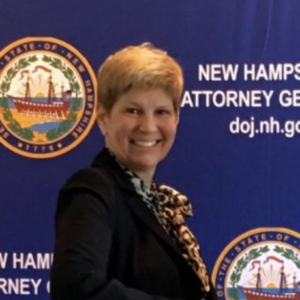 Biden Picks Young for US Attorney, Gets Bipartisan Praise

Granite State leaders from both sides of the aisle praised President Biden’s nomination of Deputy Attorney General Jane E. Young to serve as the United States Attorney for the District of New Hampshire.

For three decades, Deputy Attorney General Jane Young has been an invaluable part of the team at the New Hampshire Department of Justice,” said Governor Chris Sununu. “I would like to congratulate Jane on her well-deserved nomination – she will do a great job serving the people of New Hampshire as our United States Attorney.”

The White House statement announcing the nomination of Young and five other U.S. Attorney nominees says they were chosen “for their devotion to enforcing the law, their professionalism, their experience and credentials in this field, their dedication to pursuing equal justice for all, and their commitment to the independence of the Department of Justice.”

“For almost thirty years, Jane has served this Office and the State of New Hampshire with distinction as an incredible prosecutor and public servant. She is one of a kind and irreplaceable, and we have enjoyed a great partnership since I began my role as Attorney General last April. I know I speak for all of my colleagues when I say that Jane will be greatly missed.”

New Hampshire Democrats also give Biden’s pick a thumbs up.

“Congrats to Jane Young on her nomination from President Biden to serve as U.S. Attorney of N.H.,” Senator Jeanne Shaheen tweeted. “A deeply committed public servant from the Granite State, I’m confident she’ll bring expertise and ensure the needs of New Hampshire communities are met. Excited for her nomination to advance.”

Senator Maggie Hassan said, “Jane Young will make a strong U.S. Attorney for the District of New Hampshire. She has spent her career investigating and prosecuting criminals and has earned a reputation that few in her field can match. As Governor in particular, I saw up close the skill and expertise Ms. Young brings to her job and I know that she will continue to serve the Granite State with distinction in this new role.

“I applaud President Biden on this excellent choice and encourage my colleagues to confirm her without delay.”