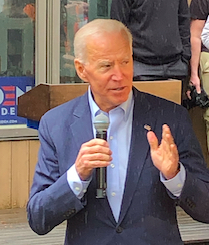 After months of speculation that its days were numbered, news broke Thursday night that President Joe Biden asked the Democratic National Committee to Kill the Granite State’s First in the Nation presidential primary status.

In a letter delivered to the Democratic National Committee’s Rules and Bylaws committee, Biden laid out his calendar for the 2024 primary season: South Carolina goes first in early February, followed by New Hampshire and Nevada on the same day a week later, then Georgia a week after that. Michigan’s primary would be the following week.

“We must ensure that voters of color have a voice in choosing our nominee much earlier in the process and throughout the entire early window,” Biden wrote. “As I said in February 2020, you cannot be the Democratic nominee and win a general election unless you have overwhelming support from voters of color – and that includes Black, Brown, and Asian American & Pacific Islander voters.”

As the incumbent president, Biden is the leader of the Democratic Party and it is highly unlikely the DNC would refuse to comply, political pros say.

For months, Granite State Democrats dismissed reports that their party was putting the state’s century-long tradition in danger. When the DNC announced it was opening the early-state calendar to all comers last April, the state’s all-Democrat delegation insisted there was nothing to worry about.

“New Hampshire has held the First In The Nation primary for over 100 years, and that’s not going to change,” tweeted Sen. Maggie Hassan at the time.

“For more than 100 years, Granite Staters have led the country in political participation through our FITN primary — and we will continue to do so for years to come,” added Rep. Annie Kuster.

Now that the bomb has dropped, the Granite State delegation has little to show for its efforts or optimism. So, they have turned to denial, insisting the primary will go on.

“As frustrating as this decision is, it holds no bearing over when we choose our primary date: New Hampshire’s state law stipulates that we will hold the ‘First-in-the-Nation’ primary,” Shaheen said in a statement to WMUR Thursday. “That status remains unchanged as we are bound by state statute. We look forward to hosting candidates in New Hampshire for the 2024 presidential primary and showing the country that we should continue to be entrusted with the ‘First-in-the-Nation’ primary that yields timely, reliable results with a process that levels the playing field for all candidates, regardless of clout or background.”

“The DNC did not give New Hampshire the first-in-the-nation primary and it is not theirs to take away. This news is obviously disappointing, but we will be holding our primary first. We have survived past attempts over the decades, and we will survive this.”

But will it? New party rules include severe punishments for Democratic candidates and state parties who violate the new calendar. The DNC chair has the power to not just strip candidates of delegates they have won or deny them access to party-endorsed debates, but it can unseat state delegations as well.

“We just took perhaps the most significant actions to enforce calendar rules ever,” said committee member Elaine Kamarck at the August meeting. “Candidates know that we expect them, not only not to campaign, but we expect them to get their names off the ballot [in contests that violate the calendar].

“We have some teeth in our rules.”

Another factor: Joe Biden. The president’s insistence on moving South Carolina to the front of the line — which even caught his allies in the DNC by surprise, according to reports — is a clear indication he plans on running for re-election in 2024. Running at the age of 82 is already risky, and campaigning in New Hampshire presents the danger of a poor performance out of the first gate. (Biden came in fifth in the 2022 New Hampshire primary and left the state before the polls closed that day.)

Republicans have already endorsed the traditional Iowa/New Hampshire/Nevada/South Carolina calendar, and there is no plan to move the Granite State out of the first slot.

“The First In The Nation Presidential Primary is a New Hampshire tradition that the NHGOP and Granite Staters alike have supported and adhered to every four years for the past 106 years,” the state party said in a statement. “It’s extremely disheartening, yet unsurprising, that President Biden and the Democrat National Committee failed to not only recognize that tradition but have attempted to undermine it.”

“President Biden’s decision to abandon New Hampshire’s FITN Primary is a moot point – state law will continue to make NH the First in the Nation primary. The NHGOP and Granite Staters look forward to continuing our tradition and welcoming all candidates to the great First-in-the-Nation state of New Hampshire.”

GOP leaders in other states are likewise sticking with the traditional schedule. A person well-placed in South Carolina Republican circles said there was “virtually no chance” of the Palmetto State moving up its presidential primary to the same day Biden is proposing for Democrats.

New Hampshire Republicans also tied the decision to the Democrats’ legal efforts to block Secretary of State David Scanlan from conducting a complete recount in the Manchester Ward 6 House race. A human error gave the Democrat a one-vote edge, but the recount left the incumbent Republican holding the seat.

Asked about the Democrats’ plans to bump the New Hampshire primary, Rep. Ross Berry replied: “That escalated quickly. Last week the Democratic Party tried to silence the voters of Manchester Ward 6. Today, they are trying to silence the whole state.”