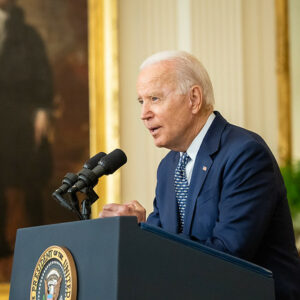 Biden Asks ‘What Are Republicans For?’ NHGOP Responds

During President Joe Biden’s press conference on Tuesday, the embattled president repeatedly responded to questions about his stalled agenda and inability to fulfill campaign pledges by blaming Republicans, particularly those in the U.S. Senate.

“Think about this: What are Republicans for?  What are they for?  Name me one thing they’re for,” Biden said.

NHJournal put that question to New Hampshire Republicans. Here are their responses:

Republicans stand for everything Maggie Hassan and Joe Biden are trying to destroy. We fight for no mandates, lower energy costs and secure borders. One year in, the Biden-Hassan administration have broken all their promises. A reckoning is coming, and the midterm elections will give voters an opportunity to put the brakes on the out-of-control Biden-Hassan administration.

When I’m in the U.S. Senate, I would have three priorities: what’s best for NH, not the political parties in DC; protect our nation’s borders; and introduce fiscal sanity to Washington. That includes fighting inflation, restoring our domestic energy production to reduce the cost of heating homes and pain at the gas pump, and proactively unclogging the supply chain so NH families can put food on their tables and small businesses can get the supplies they need to compete.  Finally, we need to establish common sense in the federal government’s botched Covid response.

This Republican is FOR reducing government spending to stop out-of-control inflation, FOR securing our nation’s southern border to stop the flow of criminals and drugs into our country, FOR keeping schools open and giving parents more control over their kids’ education, FOR rebuilding America’s lost energy independence, FOR letting law enforcement combat rising crime, FOR the right to life, and FOR bringing New Hampshire values to Washington.

Our national political leaders are out of touch with the needs of everyday Americans and need a serious dose of New Hampshire common sense. I look forward to joining a new majority in Congress to create economic prosperity for the middle-class by cutting taxes for working families and tackling inflation by curbing Washington’s addiction to increased spending. We’ll revitalize the American economy by incentivizing domestic manufacturing and making America energy independent. We’ll create a safer America by securing the southern border and standing with law enforcement. And we’ll put parents – not bureaucrats- in charge of their children’s education.

We’re for treating police with respect and holding criminals accountable.

We’re for an immigration system that works on America’s terms.

We’re for a foreign policy that never abandons a single American behind enemy lines.

We’re for an education system that respects parents’ roles and keeps political agendas out of the classroom.

We’re for elections where it is easy to vote and hard to cheat.

We’re for respecting our Constitutional Rights as Americans and standing up to the federal government when it tries to force unconstitutional mandates on our nation’s citizens.”

The Republican Party is the Party of Freedom.

Real Republicans across America advocate against unconstitutional vaccine mandates that destroy the lives of millions of Americans.

Real Republicans put the power to determine their child’s education back in the hands of parents and away from the woke radical Democrats.

Real Republicans FIGHT for Conservative values both on the campaign trail AND in the chambers of government.

Career politicians like Ann Kuster and Joe Biden have spent their careers passing regulations and taxes that hurt small businesses. I know this because I built a small family business into one of the best breweries in the world and one of the larger employers in the North Country despite the roadblocks that Washington’s incompetence sent our way. In Congress, I’ll work as a partner with Governor Sununu to cut red tape so that Granite State businesses can thrive. I’ll ensure we secure our southern border, cut back on spending, and put a stop to the Democrats’ unconstitutional mandates.