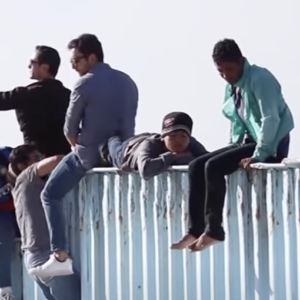 My parents taught me early in life that it is wrong to break the law – and it’s worse when you purposely go out of your way to try and hide it.

Recently, the Biden Administration was exposed for its regular practice of flying thousands of illegal migrants across the country in the dark of night, on what have become known as “mystery flights,” and dropping these folks off in unsuspecting communities without anyone knowing anything about it, or even having a choice.

How is this happening in our country?

That is the question I have been asked over — and over — again from New Hampshire citizens who expect their government to uphold the rule of law, just as they do in their own communities across the state.

We know that our southern border has been in crisis since President Joe Biden took office in January of 2021. The U.S. Border Patrol reports almost two million encounters along the Mexican border last year alone.  Even the Biden administration’s own DHS Secretary Alejandro Mayorkas admits, “Look, it’s worse now than it, frankly, has been in at least 20 years, if not ever.”

This past summer we watched in awe as thousands upon thousands of illegal migrants crossed the Mexican border into Texas and organized their own housing camps.

We also witnessed President Biden and Congressional Democrats like Senator Chuck Schumer, Speaker Nancy Pelosi, and our own Senator Maggie Hassan, refuse to call out this situation for what it is — a crisis.

To be sure, many of these illegal migrants are crossing the border because this Administration’s policies (or lack thereof) incentivize them to do just so. Yet these “mystery flights” ultimately cause an untold burden on communities across America in areas of housing, education, and healthcare — not to mention the strain it is placing on our nation’s law enforcement community.

The Biden Administration purposely misled the American people when it claimed these ‘mystery flights’ are merely settling unaccompanied children, as these recently released videos show full grown adults departing from the planes landing at regional airports across the country, again in the dark of night.

The Biden Administration’s “mystery flight” policy exposes its contempt for regular Americans. It also exposes the administration’s guilty conscience; why else would they sneak around in the dark?

And yet, what does Maggie Hassan have to say about all this?  Nothing, of course. Hassan even sits on the powerful US Senate Homeland Security and Government Affairs Committee. But she’s too busy going on liberal cable news programs raising money off of ending the Senate filibuster rules and voting to allow the federal government to take over our local elections.

As the Town Manager of Londonderry, and Chairman of the Pease Development Authority, I’ve overseen activities at the Manchester-Regional Boston Airport and the Portsmouth International Airport. Make no mistake, blatant disregard for the law such as this would not have been tolerated at those airports, and it shouldn’t be happening at other airports in our country.

Time’s up for the dishonest and disinterested politicians in Washington, DC.  Our country simply cannot afford to accept the actions of the Biden Administration’s open border policies which have led to drugs like fentanyl to flow across our nation’s border, not to mention the ease in which terrorists intent on doing harm to our country are able to evade federal authorities.

And we cannot let New Hampshire’s US Senator Maggie Hassan get away with just standing by as she allows the corruption and lawlessness in Washington to continue.

New Hampshire deserves a US Senator who fights to secure our nation’s southern border and do the job of which they were entrusted – to protect our homeland and its people.  Maggie Hasn’t, I will.

Kevin Smith is a Republican candidate for the United States Senate. He most recently served as the Londonderry Town Manager from 2013-22 and the Chairman of the Pease Development Authority from 2017-22. He wrote this for NHJournal.com.