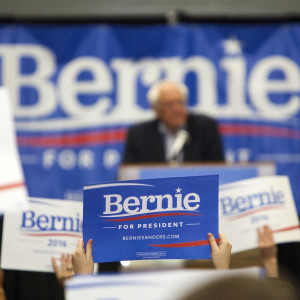 When it comes to the Democrats leading the pack in New Hampshire’s congressional primary this Tuesday, Bernie Sanders has to be asking himself: “What am I, chopped liver?”

One of the most surprising moments during the NH-01 Democrats’ TV debate Wednesday night came from one of the most innocuous of questions: Who did you support in the 2016 presidential primary?

New Hampshire newcomer Maura Sullivan’s answer has gotten the most attention–not only did she not even live in New Hampshire in 2016, she didn’t bother to vote in the Virginia “Super Tuesday” primary when the Democratic POTUS race was red hot.  (Hillary won Virginia 64-35 percent).

“Maura didn’t vote in the primary but supported Hillary Clinton–when the stakes were high in the the general election, she left her job at the Pentagon to knock doors in New Hampshire for Hillary Clinton,” her campaign said in a statement.

But we learned something more interesting about the overall field of candidates: None of the frontrunners backed Bernie Sanders. In a state he won by 22 points over Hillary Clinton.

Chris Pappas was a Clinton guy. Sullivan didn’t vote. Naomi Andrews, the Shea-Porter staffer backed by the incumbent congresswoman, was also on Team Hillary.  All the candidates who have an Establishment resume backed the Democratic candidate who got crushed.  Does this really reflect the mood of the 2018 primary voters in the Granite State?

It certainly didn’t last Tuesday, where a solidly-liberal Democrat, Congressman Mike Capuano, was crushed by 17 points in his primary by a left-of-Sanders challenger, Ayanna Pressley in Massachusetts. Or two weeks earlier when a solidly-progressive candidate in Florida stunned his party by becoming the Democratic nominee for governor over better-known and better-funded candidates.

This was a debate in which most of the candidates supported free college tuition and single-payer health care, straight from the Sanders playbook. So where are the “Bernie Bro” (or “Sanders Sis?”) candidates?

The argument from Pappas supporters is that NH-01 is a more moderate district. Trump won it in 2016 and the Ocasio-Cortez candidates just aren’t a good fit here.  Maybe.

But it’s also the case that this is…a Democratic primary. The voting pool will come almost entirely from the voters who overwhelmingly backed Sanders. And does anyone think the mood of those voters has become more moderate since 2016? Isn’t it more likely that the partisan, progressive base is even more pumped up?

It could be that those voters are content with moderate, mild-mannered Chris Pappas, or with “sat home on Primary Day” Maura Sullivan. But it’s possible that the #ImpeachNow progressives won’t be content with anything other than a passionate progressive like Rep. Mark MacKenzie or Rep. Mindi Messmer. (Lincoln Soldati, who’s campaigned hardest on his support for impeachment, actually voted for Hillary, too. Go figure.)

Yes, these more progressive candidates are being outspent and haven’t been at the top of any public polls. Ask Joe Crowley and Mike Capuano how that worked out.