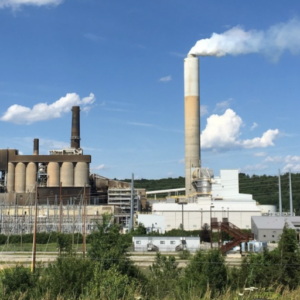 BEAULIEU: Why Coal Must Go

The Merrimack Generating Station in Bow, N, H. is the last coal-fired power plant in New England, and it is costing New Hampshire millions of dollars. Climate change hurts New Hampshire families and will cost us billions of dollars in damages to property value and critical infrastructure. We must rapidly transition from harmful and expensive sources of energy like coal and methane and embrace renewable energy. We can create jobs for energy workers in booming fields of solar and wind energy and clean up land the coal plant is on to remove toxins from the coal.

The coal plant should be replaced with solar or wind energy – something that would benefit the residents of Bow and end the pollution of their air and water.

At approximately 4:13 p.m. on Saturday, January 8, No Coal No Gas activists were at the Merrimack Generating Station demanding the coal plant shut down. At the same time, the New England Energy grid, according to data from ISO New England, was using only 26 percent of its seasonal capacity for renewables and 98 percent of its seasonal capacity for coal.

The 98 percent of the seasonal capacity for coal only made up 3 percent of the total amount of energy being used on the grid. That 3 percent could easily be replaced with renewable energy on our grid. We don’t need this coal plant to keep the heat on in New Hampshire.

Renewable energy supplies in NH can currently supply the additional 3 percent of our energy that coal provides in instances where the coal plant is usually activated. New Hampshire also needs to invest in Offshore Wind Energy to bring jobs and cheap clean energy to residents.

The New England energy grid is adding more renewable energy every year. The city of Manchester’s new solar array is fully operational as of January 11th, and will provide 3.8 million kilowatt-hours of clean energy to the power grid on an annual basis. Vineyard Wind off the coast of Martha’s vineyard is in the process of building 62 wind turbines.

We have the technology and policy solutions to transition quickly away from fossil fuels, but we lack the political will. Fossil fuel companies have invested millions of dollars into stifling the growth of renewable energy and national fossil fuel front groups continue to buy their influence with our local politicians. It is time to shut down the Merrimack Generating Station in Bow and transition to renewable energy because this is what we need to do to improve the health of New Hampshire residents and bring more economic opportunity to our state.

We must replace this coal plant with renewable energy. Methane gas is not an acceptable replacement for coal, as it emits methane into the atmosphere in addition to carbon. Methane has 25 times the impact that carbon does when you compare them pound-to-pound. Buying methane gas from out of state sends dollars and jobs out of New Hampshire. Investing in New Hampshire’s renewable energy industry will keep jobs and dollars in the Granite State.

Burning coal, oil, and methane gas cause climate change-fueled disasters like floods, fires, hurricanes, and droughts to increase in severity and frequency. New Hampshire is already suffering from the effects of climate change as our ski seasons get shorter, droughts become more common, and homes and businesses flood more often. We are already building more renewable energy and closing down costly and polluting power plants.

We must continue to do so by closing the Merrimack Generating Station in Bow.

Rebecca Beaulieu is Communications Director for 350NH. She wrote this for NHJournal.com.