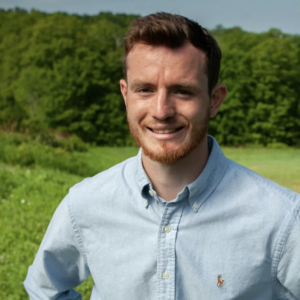 Posted to Politics May 18, 2022 by Caroline McCaughey

Republican Tim Baxter is running for Congress in New Hampshire’s First District as a self-described “conservative fighter.” But insiders say he faces an uphill battle against politically connected opponents.

Baxter disagrees. “Just because someone is politically well-connected it does not mean they are a fighter for the America First agenda,” he told NH Journal. “I want to conserve liberty and freedom. That’s what this state is about. This is the ‘Live Free or Die’ state.”

“The correct amount to Ukraine is ZERO. Reject America Last politicians,” Baxter tweeted. He denounced the 57 Republicans who voted for the bill “RINOs” (Republicans In Name Only.)

Baxter is clearly running in what Biden calls the “Ultra MAGA” lane as an uncompromising Trump supporter. His problem is the other First District Republicans — Matt Mowers, Karoline Leavitt, and Gail Huff Brown — all have connections to Trump and are seeking his endorsement.

At 24 years old, Baxter would be the youngest member of Congress if he wins. In addition to serving in the New Hampshire House, he also runs a business renovating and renting multi-unit housing. And he started a nonprofit, Second Chances, to help those struggling with addiction.

More than 107,000 Americans died of drug overdoses in 2021, according to preliminary data from the CDC. New Hampshire has one of the highest opioid overdose death rates in the nation. Baxter says he has thought deeply about this issue since founding Second Chances. He contends we need to address “the reason why people become addicted as well as the supply.” He believes “revitalizing our manufacturing base” is critical, so those most likely to be impacted by opioid addiction in the state – White, rural, blue-collar adults – have “high quality paying jobs” and “purpose.”

But, he conceded, “there’s no silver bullet. As much as I wish there was.”

Baxter says he is behind Trump’s America First agenda, wants term limits for Congress, and regularly rails against the “corrupt Washington establishment.”

“Electing RINOs who adopt Republican rhetoric during the primaries but turn their backs on the people they represent once elected is one of the reasons Washington has an out-of-control spending problem,” Baxter wrote in a press release.

“I certainly think that quote is correct,” he told NHJournal. When pressed to name which of his primary opponents is a RINO, Baxter demurred, saying he is the only Republican in the race with any elected experience and a voting record. “I try to campaign on my record,” he said. “It’s very clear what I would do in Congress.”

Baxter is ardently pro-life. He celebrated the news that Roe v. Wade may be overturned and wrote in one of his campaign emails, “Abortion is murder.” He is critical of the “spineless RINOs in New Hampshire” who now support adding a “fetal anomalies” exception to New Hampshire’s 24-week abortion ban. “This is very personal to me,” Baxter told NHJournal. His brother Taylor was born with Williams Syndrome, a genetic disorder that impacts normal brain and body development. “He was considered a fetal anomaly,” Baxter said.

The latest polls show just one in five Americans support a total ban on abortion, another 25 percent support abortion on demand, and a majority think it should be legal but with some limits.

When asked whether he would support a federal bill outlawing abortion, Baxter told NH Journal, “I will be a pro-life vote in Congress.”

He doesn’t think his pro-life views will be a liability in the general election, though, because he says Democratic incumbent Chris Pappas’s support of abortion in the third trimester is “widely out of step with where the public is.”

One position that sets Baxter apart–which dovetails with revitalizing depressed areas–is his fervor for cryptocurrencies. He says Bitcoin mining could help bring “high-quality, good-paying jobs” to “blue-collar, rural areas that have been decimated from globalization.”

Baxter faces an uphill fight in the GOP primary. Fox News host Sean Hannity endorsed Huff Brown last week, and she appeared on his program Friday night. Leavitt features somewhat regularly on Newsmax. Mowers earned the GOP nomination in 2020 and has the most name recognition. Nearly 65 percent of registered voters had never heard of Baxter in a March St. Anselm College poll.

That is not deterring Baxter, who appears ready for battle: “I’m a proven conservative fighter. I’m clearly the best candidate for the job.”