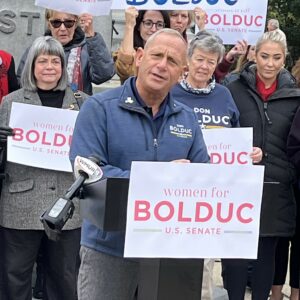 Surrounded by “Women for Bolduc,” the Republican nominee for U.S. Senate challenged the woman he is running against to join him on the debate stage.

At a press event outside the State House in Concord, retired Gen. Don Bolduc rebutted claims by Sen. Maggie Hassan (D) that he supports a federal abortion ban and called her out for dodging debates and declining to campaign in person in the Granite State.

“It’s time for change and she knows it — otherwise she would debate me,” Bolduc said. “But she’s hiding in her bunker. She pops up long enough to do a photo op, then she goes back to her bunker. C’mon!” 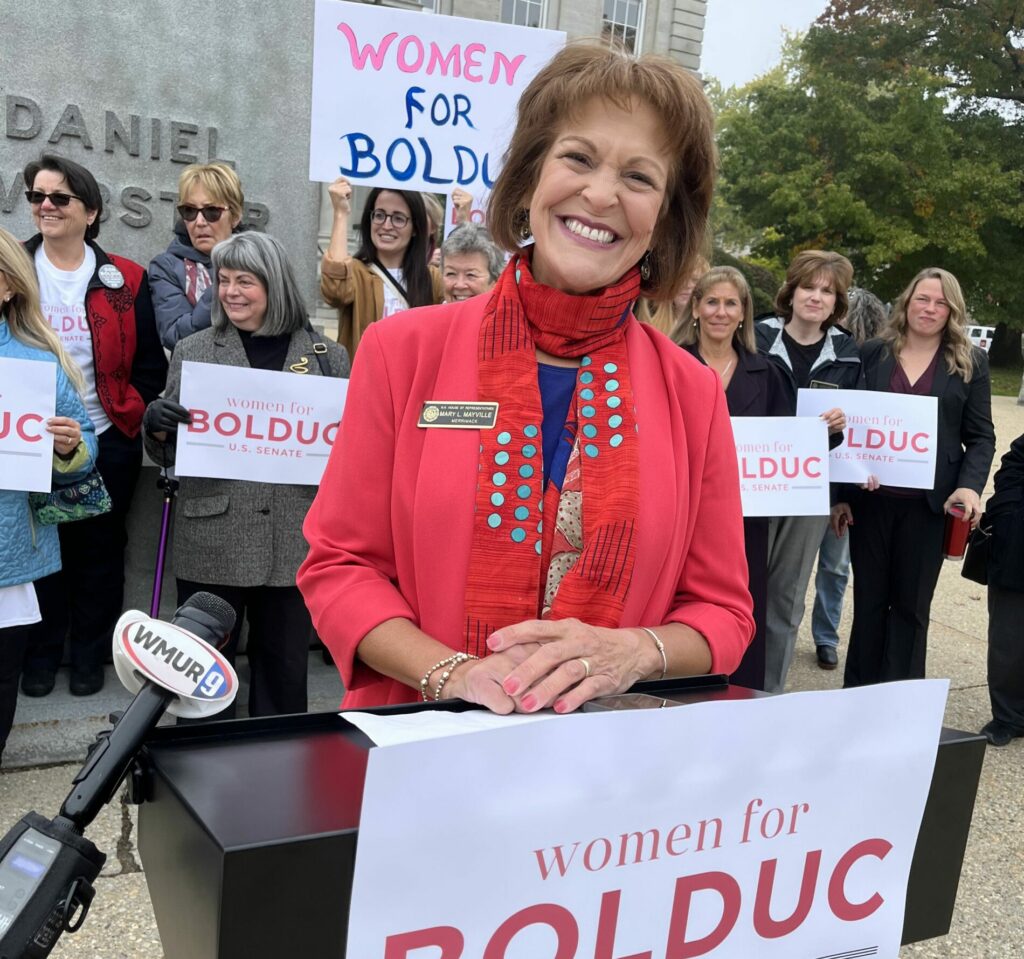 One of the women supporting Bolduc echoed that theme. “Maggie Hassan has forgotten the people of New Hampshire, that’s why she hasn’t campaigned on the ground,” said state Rep. Mary Mayville (R-Merrimack). “Have you met this man? He’s everywhere across the state. I challenge you to shake his hand and take his measure.”

Bolduc has proposed seven debates while Hassan released a “take it or leave it” list of three debates before the GOP primary election had even been held. After agreeing to a fourth debate in Nashua scheduled for Wednesday, Hassan’s staff contacted the hosts and threatened to not participate at all unless it was changed to a forum and kept Bolduc out of the room while she took questions.

Asked by NHJournal if the Hassan campaign is negotiating with his campaign to reach an agreement on debates, Bolduc said Hassan refuses to even discuss it.

“They won’t pick up the phone,” Bolduc said. “We’re open to talking with them to find the best way for us to stand shoulder to shoulder on stage, but they don’t want to have that conversation.”

The Hassan campaign has repeatedly declined to respond to questions about the debates, or the fact that she is averaging just one in-person campaign event per week. Hassan has also refused to release her “public” schedule, thus limiting contact with the public and the press.

Hassan continues to lead in the polls, thanks in large part to her overwhelming support among women voters. The Bolduc event Tuesday was designed to reassure them that the GOP candidate can be trusted on the contentious issue of abortion. Bolduc has been hit with millions of dollars in ads from Hassan and her allies falsely claiming he supports a federal abortion ban.

“I do not support a federal ban. I support the states controlling it. I support what the legislature comes up with, with women in this state on both sides of the issue. And I believe women on both sides will get a better shake at the state level than at the federal level,” Bolduc said. “You can trust me on this issue because this is what I believe.”

Bolduc was asked about his comments at an event in Auburn when, while emphasizing his support for state control of abortion, he pointed to some legislators in the audience who happened to be men and said, “It belongs to the state. It belongs to these gentlemen right here, who are state legislators representing you.”

Some Democrats and media outlets have suggested Bolduc was saying that only men should pass abortion legislation. Hassan spokesperson Sydney Petersen said, “Every chance he gets, Bolduc reinforces that he believes politicians—and more specifically Republican men—should control a woman’s most personal decision about her future.”

Bolduc dismissed the question, saying he was referring to the legislators in front of him who happened to be men. Walking over to Rep. Mayville, he said, “I feel very comfortable with you making these laws,” and, to cheers from the group, hugged her.

Hassan opposes any limits on abortion, including in the final three months of pregnancy. She supports a federal law overriding New Hampshire’s state law allowing unrestricted abortion for the first 24 weeks of pregnancy.

In the gubernatorial debate earlier that morning, the candidates were asked to name the most important issue facing New Hampshire. Gov. Chris Sununu cited inflation and rising prices. His challenger, state Sen. Tom Sherman said a woman’s right to choose.

Bolduc also shrugged off news that the National Republican Senatorial Committee has pulled nearly $3 million in funding from his race. He noted Republicans had spent more in the past month on the Senate race than Democrats and that he is getting support from other sources.

On the question of whether the national party still sees him as a viable candidate, Bolduc said “absolutely.”