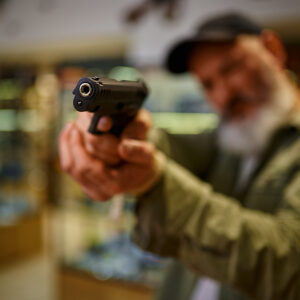 The homicide rate in the U.S. jumped 30 percent in 2020, the highest one-year increase in 100 years, the CDC reported earlier this month. But it didn’t hit New Hampshire,

Despite having one of the highest rates of gun ownership in the country, New Hampshire has the lowest murder rate as well, according to FBI crime data. Maine and Vermont are close behind.

All three allow for people to carry concealed firearms without a permit, also known as Constitutional Carry, or Vermont Carry as it’s sometimes known. Vermont was the first state in the Union to carve out that right.

While New Hampshire’s crime rate went down, it skyrocketed nationally. The FBI found a 30 percent spike in murders in 2020, the biggest single-year increase in the modern record-keeping era. The violent crime rate went up to 398.5 incidents per 100,000 people.

In comparison to New Hampshire and other New England states with open gun laws, parts of the country with harsh gun restrictions deal with rampant violent crime. Chicago has some of the toughest gun laws in the country, and one of the highest murder rates. According to the FBI, there were 774 murders in Chicago in 2020, up from 506 in 2019.

New Hampshire has among the highest rates of gun ownership in the country– the second-highest number of guns per capita according to one survey. New Hampshire also makes it easy to buy guns. Guns and Ammo magazine ranks the Granite State number 17 on its Best States for Gun Owners list, ahead of Alabama, South Carolina, and Florida.

The connection between responsible gun ownership and low crime is nothing new. John Lott, author of More Guns, Less Crime, said criminals are deterred when more law-abiding people are armed.

“Criminals are deterred by higher penalties. Just as higher arrest and conviction rates deter crime, so does the risk that someone committing a crime will confront someone able to defend him or herself,” Lott said during an interview with the University of Chicago Press.

While some scholars dispute Lott’s findings, his theory appears to be working in the Granite State.

When New Hampshire adopted the Constitutional Carry system in 2017, the left said that it would open the floodgates for gun violence in New Hampshire. Prior to the 2017 change, New Hampshire gun owners could open carry a firearm without a permit, but were required to seek a concealed carry permit from their local police department. The law gave police chiefs the discretion to determine if the person requesting the permit was “suitable.”

At the time, New Hampshire Democratic Party Chair Ray Buckley criticized Sununu for signing the bill that would take away power from police.

“The governor claims concealed carry is about ‘safety,’ but he is making it harder for law enforcement officials to keep track of guns that fall into the wrong hands,” Buckley said in a statement.

Deidre Reynolds, a New Hampshire volunteer with Moms Demand Action for Gun Sense in America, said at the time that adopting Constitutional Carry would make the state less safe.

“You have put politics over public safety, kowtowing to the extreme agenda of the national gun lobby,” Deidre Reynolds, a New Hampshire volunteer with Moms Demand Action for Gun Sense in America, said in a statement. “Abandoning critically important public safety standards is just wrong.”

J.R. Hoell, with the New Hampshire Firearms Coalition, said people in New Hampshire don’t make a big deal about carrying firearms; for the most part, it’s just part of life, he said. It is also understood that for someone looking to commit a crime, anyone they encounter might be ready and able to fight back.

“People are capable of responding in real-time,” Hoell said. “The bottom line is, behind every tree and bush is someone likely to respond in real-time.”