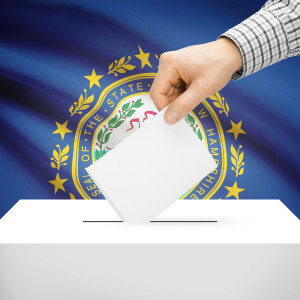 As Primary Approaches, N.H. Cracks Down on Double Voting

As New Hampshire enjoys its week at the center of the nation’s political universe, new voters eager to help pick the next president in the First in the Nation Primary should be careful not to follow the oft-quoted axiom: “Vote early and often.”

They are welcome to vote, but only once.

New Hampshire Secretary of State Bill Gardner is determined to protect his state’s First In The Nation status, particularly in the wake of the ongoing Iowa Caucus fiasco. Once widely mocked for saying during a hearing on ballot security, “You can’t hack a pencil,” Gardner’s cautious approach has received wide praise of late.

Another step New Hampshire has taken to protect the election process was to enter the Interstate Voter Registration Crosscheck Program in 2016. Since that time, state authorities have prosecuted several people for voting more than once in the same election.

In January, Charles Cartier Jr. of Madison pled guilty to voter fraud after casting ballots in New Hampshire and in Massachusetts in the 2016 election. It was the fifth successful prosecution for double voting, according to state officials. Two similar cases are pending.

Cases include a Hampton couple who voted in New Hampshire and Massachusetts, a Florida man who falsely claimed a Hooksett address, and a UNH student who registered in Durham after voting absentee in the Bay State.

New Hampshire law allows new residents to register at the polls on Election Day. Would-be voters who lack a New Hampshire ID or proof of residence can sign an affidavit, which the Election Law Unit will verify after Election Day.

That change has been a topic of partisan battles at the State House, with Republicans arguing that voting should be limited to New Hampshire residents, and Democrats claiming the measure is meant to dissuade college students from voting in the Granite State.

Given that New Hampshire has the highest per capita number of college students in the country, they provide a target audience for the Democrats running in the New Hampshire Primary on Tuesday.

Billionaire Tom Steyer, for example, created NextGen America in 2013 to “mobilize young people on issues of climate, healthcare [and] justice.” The group claims to have registered more than 1.3 million voters and claims credit for the defeat of New Hampshire incumbent Republican Sen. Kelly Ayotte in 2016.

A college ID or housing form is sufficient to register to vote, however new voters should be aware that they will be claiming New Hampshire residency, and may no longer vote in their hometowns.

In one case, the Election Law Unit discovered a voter with a history of voting both in Bedford and in South Carolina over the past decade, but closed the case because the man died in September 2019.

In another, a Keene woman voted by absentee ballot in October 2018, and also registered and voted at the polls on Election Day.

The Crosscheck program was suspended in December as part of an ongoing lawsuit In 2018, ACLU of Kansas sued the Kansas Secretary of State’s Office, which created and ran the Crosscheck program, alleging breaches of confidential voter information and discriminatory results.

Kansas agreed to suspend Crosscheck in December until it could implement security upgrades recommended by the Department of Homeland Security.

Kansas could restart the program, or get a third party to run the database. Scanlan also said New Hampshire could join in other interstate compacts such as the Electronic Registration Information Center (ERIC), or partner with neighboring states most likely to share voters who double registrations such as Massachusetts and Vermont.

“The law allows the Secretary of State to participate with any state or group of states,” Scanlan says, pointing to the statute that directs his office to track down voters who cast ballots more than once.