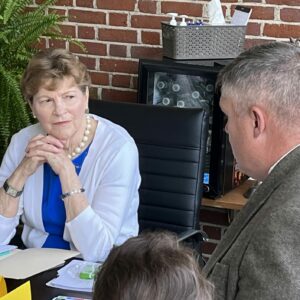 More than 7,000 overdoses in Manchester and Nashua. An opioid death toll in July that’s nearly as high as all of 2021. Young teens attempting to overdose on acetaminophen.

Those are just a few of the takeaway numbers from a roundtable on substance use prevention efforts hosted by Sen. Jeanne Shaheen in Manchester on Friday.

“We were making some real progress before the pandemic,” Shaheen said. “The numbers were coming down. But now we’re seeing some backsliding.”

Gathered around a conference table at the offices of Makin’ It Happen, people from the front lines of the fight against opioid addiction discussed the strategies they are using to break the cycle of addiction. While there has been some success, they agreed there is much more to be done.

“We’re seeing pretty much all synthetic fentanyl now. The days of a young person going into the medicine cabinet at grabbing the prescription Oxy are done,” Stawasz said. “The cartels have wised up and gone completely to synthetic fentanyl.”

And that fentanyl is making its way into marijuana, cocaine, methamphetamine, and fake pills, often unbeknownst to the user.

“I personally have experienced several occasions on a call when someone we’ve woken up from an opioid overdose will insist, ‘I was not using an opioid, I’m not an opioid user. I smoke marijuana. But I bought it from a different person.’ I think that’s contributing to an increased number of deaths,” Stawasz said.

“I expect we’ll eventually see a similar trend across the state,” Stawasz warned.

According to the data from American Medical Response, through the end of June, Nashua and Manchester have seen a 20 percent increase in opioid overdoses from the same time last year. In the two cities alone, there have been 453 overdoses in the first half of 2022 and 45 suspected overdose deaths. The two cities typically have among the highest rates of overdoses and overdose deaths in the state.

Nashua currently has 27 suspected opioid overdose deaths this year. In 2021, the city recorded 30 such deaths. If the addiction crisis continues at that pace, Nashua will likely have a record 55 deaths this year, according to projections. In Manchester, the projection expects 59 opioid deaths, the highest total since 2018.

Shaheen frequently brought the conversation back to funding, noting the federal spending on mental health and addiction services she has supported in legislation like the gun safety legislation just passed by Congress last month. When she asked participants to name the one thing Washington, D.C. should be thinking about on this issue, the response was “harm reduction.”

“Fentanyl test strips, Naloxone, following up with people,” said Brian Mooney with Makin’ It Happen. “None of this works if someone’s not alive.”

The roundtable included members of law enforcement like Officer Steven Orton with the Laconia Youth Alliance and social service providers like Monica Gallant from the Community Action for Safe Teens in Milford. One thing they had in common is early contact with the changing face of addiction and substance abuse, said Laurie Warnock, prevention educator for the Northern New England Poison Center.

“Our opioid numbers are down — our hospitals have learned to deal with that,” she said. “What we are seeing a rise in, particularly among younger teens — 10, 11, 12 years old — is acetaminophen poisoning for self-harm.”

Stawasz confirmed that it’s a growing problem. “I’ve actually seen in the last month, a couple of cases of Tylenol and aspirin [being used] when people have tried overdose.”

According to Warnock, this is a symptom of the mental health crisis many young teens are experiencing, “whether it’s bullying or relationship issues, they don’t have the mental health support they need.” And it’s a reminder that young people will keep experimenting and looking for new ways to self-medicate.

“Parents have gotten great about getting rid of those prescription meds and the like — but who thinks about looking up their Tylenol?”

With additional reporting from Damien Fisher.