The COVID-19 numbers continue to improve across the U.S. even as states loosen their restrictions. New Hampshire’s infection rate is flat or falling after two weeks of “flex” opening, mall shopping and outdoor restaurant dining. But it wasn’t enough good news to prevent Gov. Chris Sununu from extending his stay-at-home order on New Hampshire businesses and families for two more weeks.

“It is our hope and intention to move beyond it on June 15,” Sununu said. “Then hopefully we can take that next step to a different look. There are still going to be a lot of restrictions in place, however. We’re not going to be back to normal in two weeks.”

Meanwhile, Eric Strauss, lead medical reporter for ABC News, reported earlier in the day that “ABC looked at 21 states that eased restrictions on May 4 or earlier and found no major increase in hospitalizations, deaths or percentage of people testing positive in any of them.”

And Politico published a new profile of Colorado’s Gov. Jared Polis (D) and his decision to begin reopening the Rocky Mountain State in late April. “Since April 27, retail stores, salons, child care facilities, manufacturers and offices across Colorado have been able to open with mandated cleaning protocols and limits on capacity,” Politico reports. The state is allowing both outdoor and limited-seating indoor dining as well.

But instead of a COVID-19 disaster, Colorado has a lower infection rate than New Hampshire’s.

The same is true in Florida and Georgia, two other states where many restrictions have been lifted for a month, while New Hampshire extends its stay-at-home order to mid-June.

Colorado’s Gov. Polis has been transparent about the metrics he’s been using to reopen his state: ignoring the fatality rate, which tends to be a lagging indicator, and instead focusing on the transmission rate and daily hospitalization rate. Once his administration saw a steady decline, they began letting Colorado get back to work.

That’s one reason Colorado has experienced the fifth-lowest increase in unemployment since the coronavirus crisis struck in mid-March, while New Hampshire is suffering the eleventh-highest job losses per capita in the country.

“We were an early hot spot, and we found it had leveled off,” Polis told Politico. “Keeping the stay-at-home order any longer wasn’t making progress against the virus.”

The Sununu administration, on the other hand, has been unwilling to explicitly lay out the metrics it’s using to justify extending one of the longest-running stay-at-home orders in the country. Asked by NHJournal for a specific set of metrics like those from Colorado’s governor, Sununu said:

“I think we’ve been very clear about the data, the metrics that we look at: the percent positive [rate of positive COVID-19 tests] as well as the hospitalization rate.”

Both of those rates have steadily declined in New Hampshire over the past month. The rate of positive tests is below 5 percent and the number of hospitalized patients has held steady at around 100 for weeks. And many of those hospitalizations are former nursing home patients whose infections are unrelated to the stay-at-home restrictions. (New Hampshire’s nursing homes have been under their own lockdown for months.)

If New Hampshire’s rates of infections and hospitalizations are as low as those in states that began reopening weeks ago, why extend the lockdown?

“If you want to compare New Hampshire to North Dakota or something like that, places that are just naturally more rural, well, of course, their numbers are going to be lower.”

“The Northeast of the United States right now is Ground Zero for COVID in the world,” Sununu added.

In fact, Massachusetts’ positive test rate has been cut nearly in half over the past month, and the Bay State’s hospitalization rate is down by more than 40 percent, too. This isn’t a surprise given the national trend in testing. 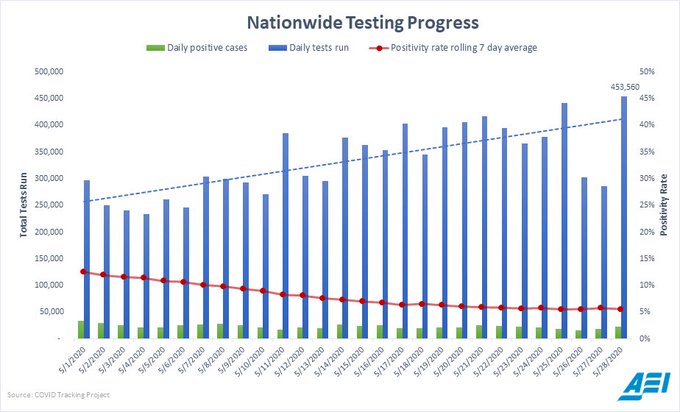 So why are the Granite State’s beaches still closed and why are childcare centers limited to only ten children per room — both of which are driving local businesses into financial distress?

“We’re going to govern and create our guidance a little differently in our metrics,” Sununu said, laying out a more extensive list. “Based on hospital beds, based on hospitalization rates, based on the percent positive cases, and based on the outbreaks in institutional facilities. I think we’re doing a great job.”

New Hampshire’s numbers in all those categories except nursing homes (“institutional facilities”) are lower than in states that have already reopened much of their economies. The odds that positive test rates or the available hospital beds are going to get significantly better are small. And how much better does Sununu want them to get before restaurants can start serving again?

“If this lasts into July, I predict we could lose 30 percent of all our restaurants — maybe 40 percent,” says Mike Somers of the New Hampshire Lodging and Restaurant Association. “They will close, and they won’t open back up.”