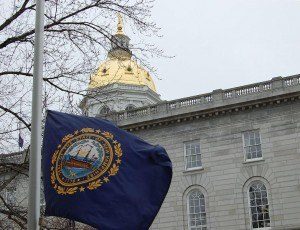 Posted to Politics May 12, 2020 by Christopher Maidment

As Gov. Chris Sununu’s business lockdown approaches Day 50, the state legislature also remains closed for business. While Republican Gov. Sununu has been receiving high marks in polls for his handling of the crisis, Republican legislators are frustrated they’re being left out of the process.

Unlike the business sector, the legislative bodies shut themselves down. And some members are beginning to complain.

Rep. Jess Edwards (R-Auburn) says the N.H. House under the leadership of Speaker Steve Shurtleff is failing to uphold its constitutional role.

The House leadership rushed through a new rule allowing it to close the House without the time to consider the rule fully. Once shut, the members have no authority to initiate reconvening; they have essentially declared themselves “non-essential.”

“The Speaker has closed the legislature and legislative services,” he said. “I cannot have a bill drafted. Under RSA 4:45, the legislature may terminate a state of emergency by concurrent resolution. In a Catch-22, we can’t even get a vote on where we stand. As the people’s representatives, we are shut out.”

“A lot of people are pig-piling on the Governor,” Edwards added. “Instead, people should aim at least some of their frustration at the House leadership.”

Rep. Werner Horn (R-Franklin) felt similarly. “The legislative branch is a check on the power of the executive and judicial branches,” he told NHJournal. “There is no check on [Governor Sununu’s] power right now.”

Horn added some blame for the Republican House leadership, accusing them of being too busy answering the governor’s “dog-whistle.”

A Bedford Republican, Linda Rea Camarota, suggested that the House and Senate should be empowered to meet remotely during State of Emergencies.

“It is clear to me that the Democratic leaders have been unsuccessful in creating a model allowing the duly elected officials to do the People’s work during this historic moment,” Camarota added.

New Hampshire has the largest state legislature in the country, and the third-largest English speaking legislative body in the world. The average age? 66. Many struggle with underlying health issues, too.

Since COVID-19 affects the elderly more, other legislators are concerned about the health risks of reconvening.

“We should adjourn for the year and wipe the slate clean,” said Rep. Hershel Nunez (R-Pelham.) “We may not reach a quorum if at-risk legislators don’t come to the session.”

Nunez cited the proximity in which legislators sit. With 400 representative seats, social distancing would be nearly impossible.

“Unfortunately, there’s little chance to move the state in the right direction while Democrats hold the reigns,” Nunez continued. “I’d love to submit positive legislation, but the way it’s going, I don’t see a path to reconvening.”

Edwards would like to submit legislation too. “It doesn’t matter if the Democrats would vote for [overturning the governor’s orders] or not. It’s my right to submit the bill for a vote,” he said.

The New Hampshire legislature has not met in session since March 12, 2020 — exactly two months ago. The last session held was a marathon, running until nearly 4 in the morning. Legislators voted to add a new rule, allowing the Speaker of the House power to change deadlines for legislation.

Just last Friday, Sununu told NHJournal that the lockdown in New Hampshire might last “a couple more months.” It’s unclear when the House Speaker plans to reopen the legislature, if at all.

As for House Speaker Shurtleff and Senate President Donna Soucy, both are plaintiffs in a lawsuit against Sununu. The two, along with members of the Legislative Fiscal Committee, argue that the governor shouldn’t be allowed to disburse CARES Act funding unilaterally.

A Hillsborough County Superior Court Judge has dismissed the original filing, citing a lack of standing. Neither the Speaker nor Senate president can sue on behalf of the legislature without a legislative vote.

They can, however, reconvene the legislature at will. That would restore the constitutional checks and balances so delicately crafted at the founding of this state.

On reopening the economy, there is broad support for trusting the citizens of the state.

“The citizens of New Hampshire understand what is at stake, and at this point can, and should be, allowed to decide for themselves how to live their lives,” Rep. Kevin Verville (R-Deerfield) told NHJournal.

“We cannot sustain 15 percent+ unemployment, and small businesses cannot survive at 50 percent capacity.” He continued, “It is time to let the Executive Orders expire, and for government to get out of the way of the economy, and people’s daily lives.”

Camarota echoed similar sentiments, saying, “I believe we are more than ready to hand over the reins to the individuals.”

“The government’s role now should become one of gathering and analyzing valid data to identify early on whether there is any sign of a resurgence as we venture out,” Camarota added.