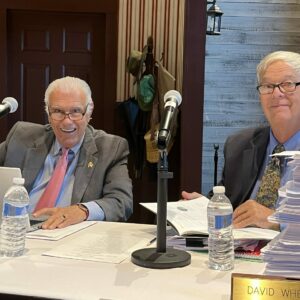 Executive Councilors Ted Gatsas (left) and Dave Wheeler at a council meeting held on the campus of New England College on July 27, 2022.
News

When Gov. Chris Sununu brought funding for three abortion providers back up for a vote before the Executive Council on Wednesday—the fourth time this year—the outcome was preordained. But the vote did add a new twist to a debate over Planned Parenthood funding in the GOP U.S. Senate primary.

As expected, Republican Executive Councilors Ted Gatsas, Joe Kenney, Janet Stevens, and David Wheeler voted down the $1 million in contracts for abortion providers. Representatives of Planned Parenthood of Northern New England, Lovering Health Center, and Equality Health Center acknowledge they perform abortions. However, they insisted the money would only pay for other services, like contraception and cancer screenings.

It was a point Democratic Councilor Cinde Warmington repeatedly made during Wednesday’s meeting.

“These services that we are talking about are about contraception, and about sexually transmitted disease testing and treatment, and about cancer screenings, and not about abortion services,” Warmington said.

Opponents of accepting the federal funds reject that argument, noting the money is fungible, and taxpayer dollars going to an abortion provider for other purposes frees up other money that can be used to subsidize abortion procedures.

“Cornerstone commends the Republican members of New Hampshire’s Executive Council for voting today to deny hundreds of thousands of dollars in funding to direct providers of abortions,” Shannon McGinley of Cornerstone Action said after the vote.

“The Republican Executive Council—unlike Chuck Morse—made the right decision today, voting down taxpayer funding for abortion clinics. Chuck Morse voted to send your taxpayer dollars to abortion clinics with no questions asked. That is disqualifying, and only the latest instance of Chuck selling out conservatives to join Maggie Hassan and the far left,” Smith said.

Smith has been on the attack since Morse’s vote on the Fiscal Committee last Friday to accept more than a million dollars in federal Title X grant money. While the language before the committee did not mention Planned Parenthood or abortion providers, experienced budget watchers knew where the money was headed.

As Cornerstone Action pointed out in a press release, “In its written request to the Committee, the Department of Health and Human Services did not list the recipients of these funds.

Immediately after the Finance Committee approved the funds, DHHS clarified in writing that funds will be going to abortion providers, vindicating Daniels. The recipients include Planned Parenthood, Equality Health Center, and Lovering Health Center.”

State Sen. Gary Daniels (R-Milford) who also sits on the Fiscal Committee, carefully questioned DHHS about how they intended to use the federal funds but received only ambiguous answers. Ambiguous enough for him to vote no—the only member of the committee to do so.

The Morse campaign defended his vote.

“The Fiscal Committee did not vote to give Planned Parenthood money. In fact, the Department of Health and Human Services specifically said Planned Parenthood of Northern New England is not eligible for these funds as they already receive Title X funding directly from the federal agency. The Fiscal Committee only votes to accept federal dollars into New Hampshire. The Executive Council then votes on which vendors receive the contracts,” said campaign manager Joe Sweeney.

“Chuck Morse is pro-life and has a long record of voting that way. He is the only one in this race that has made sure New Hampshire stopped abortions in the 7th, 8th, and 9th months of pregnancy up to birth, and he’s also made sure last year’s budget included a provision that prohibits state funding of abortion services.

“Kevin and his campaign are lying about Chuck Morse’s record and distracting Republican voters from the real opponent—radical Democrat Maggie Hassan,” Sweeney added.

Granite State Republican insiders are split on the value of this fight inside the GOP primary. Some believe the abortion issue is a loser for the party and every mention is a win for Democrats.

Others believe Smith’s attack is just the beginning of challenges facing Chuck Morse over his long record of casting votes in the legislature. One GOP veteran, who is not working for any Senate candidate and asked to speak on background, said some in the party have worried from the beginning that Morse’s voting history is a treasure trove of opposition research for Hassan’s campaign.

“He’s been in Concord since, what, the Nixon administration? [Morse was first elected to the House in 1998]. Just think about how many state budgets he voted for. Every one is full of issues that could be used against him. And Hassan has the money to do it. This Smith stuff is nothing.”

But in a GOP primary where the pro-life issue is important, that could help Smith create some differentiation between himself and Morse.

“The pro-life movement has had far too many politicians pay lip service to our cause, only to refuse to fight when in office,” said former N.H. Right to Life Chair Barbara Hagan in a statement provided by the Smith campaign.

“Chuck Morse’s vote to send millions of taxpayer dollars to the nation’s largest abortion provider is disqualifying. Kevin Smith is the strongest supporter of our movement in this race, and pro-life voters will remember that when they vote this September.”