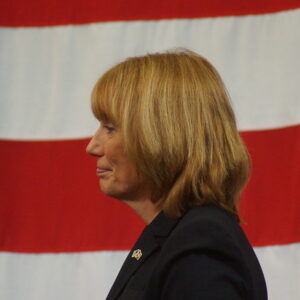 The 2022 general election debate season kicks off when Gov. Chris Sununu and his Democratic challenger state Sen. Tom Sherman go head-to-head on the Jack Heath radio show Tuesday at 9 a.m. It is one of a dozen or so debates among the federal and statewide candidates between now and Election Day.

The number is in flux because, when it comes to debates, the candidates themselves are, too. For example, U.S. Sen. Maggie Hassan had agreed to participate in a debate with her GOP opponent Don Bolduc hosted by the Nashua Chamber of Commerce. But Hassan’s campaign later threatened to walk entirely unless the debate was modified into a “forum” where only one candidate would appear on stage at a time, according to the Chamber.

The Nashua debate was one of seven that Bolduc has agreed to participate in. But Hassan will only show up for three. And one of those is being hosted by NHPR, which makes no secret of its left-of-center politics.

According to the Bolduc campaign, Hassan is refusing to negotiate a debate schedule, simply giving her opponent a “my way or the highway” ultimatum. The Hassan campaign refused to respond when asked for confirmation.

Hassan is hardly alone in avoiding debates this cycle. In Pennsylvania, Democratic U.S. Senate candidate John Fetterman, who suffered a stroke earlier this year, spent months refusing to debate. He only recently agreed to a single debate, held on October 25, nearly a month after early voting starts.

In Georgia, Republican Herschel Walker will only debate Sen. Raphael Warnock once, limiting the number of questions he is likely to face over allegations he paid for a woman’s abortion.

And in Arizona, Democratic gubernatorial candidate Katie Hobbs is refusing to ever appear on stage with her GOP opponent Kari Lake. Not surprisingly, Lake is making an issue of Hobb’s refusal to give voters the basic courtesy of facing a nominee chosen by thousands of Arizona voters.

“I have no desire of the spectacle that she’s looking to create,” Hobbs told CBS News, adding that she is “happy with where we are.”

“Where she is” is trailing her Republican opponent by one point in the RealClearPolitics average.

More and more, however, pundits question whether debates matter.

According to Larry Sabato, who oversees “Sabato’s Crystal Ball” at the University of Virginia Center for Politics, candidates can “get away with canceling debates without much of a penalty.”

Sabato told ABC News that debates over debates “have become a permanent part of campaigning, and most people just tune it out because it doesn’t affect their lives. It has no real impact on your campaign or your likelihood to win.”

“In the days of yore, when I was a young political hack, debates were all the rage. Everyone studied and practiced, debate prep was a serious thing mainly because voters watched. A gaffe could be deadly. Catching that hitch moment and seeing replay in ads again and again created a win-or-lose destiny for candidates,” Griffin said.

“This election, like so many in recent years voters are too angry and impatient to listen to what they consider to be BS from both sides. Nobody has the time or interest — except for about a third of Democrats and a third of Republicans already firmly rooted in one camp or the other,” Griffin said.

Jack Heath, who is hosting the Sununu-Sherman faceoff, doesn’t agree.

“In New Hampshire, debates do matter,” Heath said. “It may be ‘inside baseball,’ but voters here don’t like it when an incumbent hides from them.”

All three incumbent Democratic members of Congress have thus far declined to debate on Heath’s show. All three of their GOP challengers have agreed to show up.

Heath says his goal for his debates is for voters “to hear the nominees answer questions that matter. While paid ads are great, there is nothing better than hearing how two people answer the same question. Voters aren’t stupid and they can tell a lot about how a candidate answers a question — or avoids answering.”

Former Democratic Congressman Paul Hodes, who ran unsuccessfully for U.S. Senate in 2010, isn’t so sure debates make a difference.

“Whether a candidate is willing to debate is a hot topic for talking heads but few others care. Given the deluge of digital information, the plague of political spam, and the polarization of the electorate, debates probably mean less these days than in the past.”

Asked if he had any advice for two gubernatorial candidates, Hodes said Sununu should play to his strengths and Sherman should come loaded for bear.

“Sununu needs to maintain his placid, Teflon-coated, ‘now you see me, now you don’t’ demeanor and tout his purported successes. Sherman is introducing himself and he has to bring out the heavy hammer on Sununu’s flips and flops, abortion, the right-wing cult Republican assault on democracy, and Edelblut’s folly” — a reference to Education Freedom Accounts.

“New Hampshire has a long and proud tradition of debates and joint forums. It’s surprising the New Hampshire media has allowed Hassan to avoid debating and joint appearances with little comment. It’s not like her landslide victory of a thousand votes out of more than 700,000 cast in 2016 suggests she is in a position of power. Her hiding should disturb every voter. What’s she afraid of?”

And Carney’s advice for Sherman as he prepares to face Sununu?

“Saying he just tested positive for COVID might help him the most.”