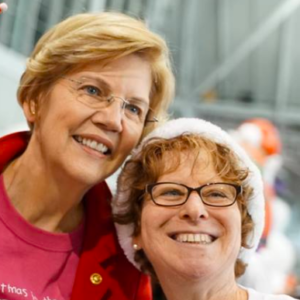 As a “NH Neighbor,” Liz Warren Enters POTUS Race as a Candidate On the Cusp

As she announces her decision to launch a formal exploratory committee for a 2020 POTUS bid, “Senator Warren is a candidate on the cusp,” according to a prominent Massachusetts-based pollster.

“In many ways she’s a candidate in-between,” David Paleologos tells InsideSources. Paleologos is director of the Suffolk University Political Research Center in Boston.  “Warren’s definitely a viable candidate, no doubt about that. But she’s neither a top-tier candidate nor a long shot. She’s not a new face, but she’s not an old hand like [former VP Joe] Biden or [Sen. Bernie] Sanders, either.  She’s on the cusp in many ways.”

While the 69-year-old Massachusetts senator’s announcement has been long expected, the timing–on New Years Eve, and early in the cycle while other big names remain on the sidelines–is somewhat surprising. Traditionally, top-tier candidates tend to sit and wait, attempting to build up some drama before the big announcement. Warren’s decision to jump in early may be her campaign acknowledging their back-of-the-pack position.

“Her decision to enter early is clearly an acknowledgment that she has considerable work to do with early state voters (and major donors) to repair the self-inflicted damage of her attempt to put the Native American question behind her,” says CNN’s Chris Cillizza.

Joel Payne, a DC-based Democratic strategist who advised the 2016 Hillary Clinton campaign, agrees that Warren’s early negatives could be a problem.   “While people point to the Native American heritage uproar,  I think the biggest danger to her candidacy is her high name ID because many voters may already have hardened opinions about her,” he told InsideSources.

And in a series of polls over the past month, those opinions among Democrats aren’t great for Senator Warren. As InsideSources has previously reported, Warren has consistently been out of the top tier of polling among Democrats, behind candidates like Biden, Bernie Sanders and Texas Democrat Beto O’Rourke.  In the most recent CNN poll, Warren was the only major Democratic candidate whose approval was underwater (negatives higher than her positives) at 30 percent approve, 32 percent disapprove.  Sen. Sanders, on the other hand, was at 51/35 percent and Joe Biden was at 54/29 percent approval/disapprove.

According to Paleologos, the top tier of candidates is “I don’t know yet” and Joe Biden, with a second-tier that includes Biden, Beto, California Sen. Kamala Harris and New Jersey’s Sen. Cory Booker. “Warren’s in the third tier–another reason she couldn’t afford to wait,” Paleologos said.

This early in the race, Warren’s sagging support among progressives is her biggest challenge. Progressive activists who traditionally energize and deliver voters in primaries have plenty of choices in 2020 (as opposed to 2016 or 2008), and they’ve yet to rally around Liz Warren. Two straw polls of progressive organizations, MoveOn.org and Democracy for America, both find Warren trailing the “Three A-Bee-gos,” Biden, Bernie and Beto.  In the DFA straw poll, she’s in fourth place at 8 percent and in the MoveOn poll (the same group that spend about $1 million on the #DraftWarren movement four years ago) she’s in fifth place at 7 percent.

According to the latest Suffolk poll, American’s top wish for Washington, DC is for politicians to work together (29 percent) far higher than more divisive issues like impeaching President Trump (9 percent). That may not bode well for a candidate best known for battling with the president.

Paleologos also notes a Suffolk poll of her own constituents in deep-blue Massachusetts earlier this year that found 58 percent of Bay Staters didn’t want her to run for POTUS in 2020.  The fact that she’s essentially announced her candidacy even before she’s been sworn in to the new US Senate term local voters just gave her shows how concerned her campaign is about their current position in the polls.

“By announcing now, she’s saying ‘I’m serious. I’m in it to win it.’ It shows that she sees a path to victory,” Paleologos said. And that path goes right through New Hampshire.

Jim Demers, a key New Hampshire Democrat, told InsideSources: “As a neighbor, New Hampshire is a must-win state for Senator Warren. Getting in early helps insure she will be in every news story in the coming weeks.” Demers, who’s backing Cory Booker, believes that “the New Hampshire primary is wide open.”

Payne believes Sen. Warren’s hopes could possibly ride on New Hampshire as “her firewall…given its proximity to Massachusetts,” while Paleologos predicts Warren will “play the home girl–twice.”

“First she’ll go to Iowa as the ‘Sooner Sister,’ the fellow Midwesterner running in the caucuses. Then she’ll morph into the ‘New Hampshire Neighbor’ from Massachusetts. After that, she’ll have to hope that some of her fellow progressives have dropped out by the time she gets to South Carolina.”

Warren’s campaign video, also released on New Year’s Eve, certainly highlighted her Oklahoma roots more than she has in the past.  Warren also goes out of her way in the video to attack Ronald Reagan–an interesting decision given that the Gipper’s approval rating among Americans in 2018 was 72 percent.

Fairly or unfairly, Warren continues to struggle with the #Fauxcahontas scandal, a story that many on the Left say has hurt her far more than originally realized. “There just aren’t a lot of Democrats talking about Liz Warren at the top of their list,” one New Hampshire Democratic activist told InsideSources after her announcement. “She’s just not generating much excitement.”

Still, progressives have hardly turned their back on Warren. “Senator Elizabeth Warren’s formal entrance into the 2020 race for President today helps launch what we believe will be a vibrant discussion of bold, inclusive populist ideas in the Democratic Primary, and we look forward to the wide array of progressive candidates that we expect to join her in it in the year ahead,” Charles Chamberlain, Executive Director of Democracy for America told InsideSources in a statement.