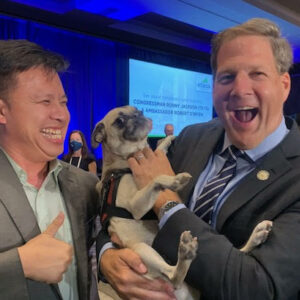 Being active in California politics, I understand that most politicians are somewhat self-absorbed and egotistical. And to be honest, when I heard New Hampshire Gov. Chris Sununu would be speaking at our California Republican Party fall meeting, I expected more of the same.

I was wrong, and very happily so. New Hampshire, your governor was one of the few shining spots this past weekend at the CA GOP convention.

Credit where it’s due: The California state party — which hasn’t done a lot right lately in my opinion– brought in someone with proven results and a real roadmap for future success. I appreciated the choice, even though I have serious doubts about our state and local Republican leadership being able to take advantage of it.

For both activists and regular Republicans, Sununu injected hope into a lot of people last weekend who have been demoralized by the failure of our recent recall election. We don’t want to sulk. We wanted a message on how to rebuild. Sununu delivered.

He stressed the importance of listening.  His story of Mink the bear and her cubs was a reminder that constituents reward you when you really listen to their concerns. Everyone loves animals, there’s nothing partisan about it. Republican leaders in California can connect with voters on nonpartisan issues as well. Sadly, that talent is inherently lacking in my party at the moment.

And Sununu certainly caught our attention when he talked about your legislators getting paid $100 a year, thereby attracting people who are dedicated to true public service. California, in contrast, gives its 40 senators and 80 assemblymen six-figure salaries and a handsome benefits package. So part of our problem is structural.

But perhaps the most important lesson Sununu conveyed to this California crowd was the power of just being pleasant.

Likability goes a long way and Sununu has it in spades. He was charming, warm, and in the moment. He talks like a regular person, not an Ivy League snob. (I say this as an Ivy League graduate.) I want someone who can communicate to everyone with simple common sense solutions, not someone who uses language to divide. If you can’t convey complexity in simplicity, voters will likely conclude you don’t know what you’re talking about.

I was lucky enough to meet the governor after his speech and get a photo or two. (That’s my dog, Pugsley.) As a regular at political meetings, I also noticed Sununu was very good at working the crowd, too.

Chris Sununu came to California and came across as a regular guy. That’s one of the most rare and irregular things in our party at the moment.

I caught up with my friend Shawn Steel after the speech. Shawn is California’s RNC National Committeeman. He agreed Sununu gave a great speech, but he said Chris should officially enter the U.S. Senate race ASAP.

I disagree. I think he can afford to wait, and instead, continue to focus on delivering good governance. These days, that goes a longer way than politics.

Either way, from San Diego it looks like your New Hampshire governor’s future is very bright.

Marc Ang is a community organizer in Southern California and the founder of AsianIndustryB2B who specializes in race relations and the minority conservative experience. His book “Minority Retort” will be released in late 2021. He wrote this for InsideSources.