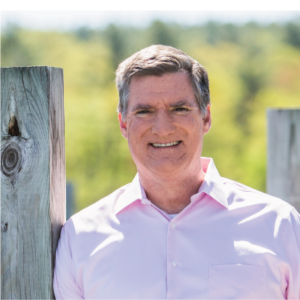 Andy Sanborn: A Conservative To Get New Hampshire Back On Track

My name is Andy Sanborn and I’m running for Congress to represent New Hampshire’s 1st District as a proven conservative who wants to return the power of our government back to where it belongs:  in the hands of the people.

I’m a fourth-generation native of New Hampshire and a third-generation small business owner that believes government is not the solution to our problems; big government is the problem.   As a traditional Yankee conservative with a liberty streak, I have embraced the “Live Free or Die” philosophy of our state to my very core.   As a small business owner, policy geek and unabashed admirer of my wife for 27 years, I only became politically active in 2007 after I experienced personally the pointless obstacles that government creates to impede job creators and hard-working citizens.

Over my tenure as a State Senator, I have been a happy warrior in my effort to fight for the interests of hard-working New Hampshire citizens.  It has never been a concern of mine to be part of the in-crowd of the political class because I’m not running for office to be like every other politician — I’m running to protect you from those politicians.  During my time in the State Senate, I’ve proven to be the first person you call if your government is ignoring you, regardless of where you’re from or what political party you count yourself a part of.

Most of us can agree what we need in order to make New Hampshire and our country stronger. It starts with common sense policies like lowering taxes on families and businesses.   It means getting our government out of healthcare, making insurance affordable for families.   It means securing our borders and implementing effective immigration policies that protect the safety of Americans.   It means protecting the Constitutional freedoms guaranteed to us.  And it requires electing proven leaders to represent New Hampshire that you can trust.

Electing leaders that you can trust means supporting candidates who won’t become part of the DC swamp as soon as they get to Washington.  The people of New Hampshire deserve to have a representative in Congress that will fight for their interests, not the interests of party leaders, lobbyists or the establishment.  During my time in the State Senate, I have been known to shake up the political process and buck the party leadership in defense of what is right for the people.  I’ve never cared about the fancy office, the status, or the popularity — I’ve only cared about putting more money back in the pockets of hard-working citizens and making New Hampshire a better place to live and raise a family. Because of my willingness to push back on the establishment in defense of the people, I’ve come under attack from those who wish to keep the status quo in place—but it is well worth it if it means protecting the interests of the constituents I pledged to serve.

Too often, we see our politicians lose sight of their constituents’ interests and focus instead on the celebrity lifestyle many of them enjoy in Washington.  I am a strong supporter of term limits for this very reason, as well as cutting the many other special perks and benefits that these politicians receive.  This is the only way to fundamentally change Washington and get the government working for the people again, not the other way around.  Of course, these self-serving politicians will do everything in their power to block such a change.  But as a true citizen legislator, I pledge to you that I will actively support and fight for legislation that provides for term limits to members of the U.S. House and Senate.

This campaign is about asking the people for a job.  I am asking New Hampshire to pick me to fight for them every day and help them with their problems.  This is what separates me from the rest — I have proven my ability and willingness to be there for constituents who have been disrespected and ignored by the government.  Together, we can change the national conversation and further an agenda focused on the people, not the power brokers and lifelong politicians.

I ask for your vote on the September 11th election and for you to join us in this fight.  Visit my website, AndySanborn.com for more information on what is at stake in this election.   Join us, and let’s get New Hampshire back on track.

1:  Where did you go on your first date?

2: If someone hit the “play” button on your iTunes Player/CD player/phonograph, etc—what song would play right now?

3: You’re leaving on a mission to Mars, never to return. You can have one last meal on Earth—and it’s in New Hampshire. What is it?