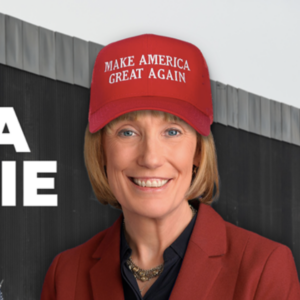 (From an NRSC press release)
[IS] Opinions

Plenty of U.S. Senate candidates have gone down to the southern border, stood in front of “Trump’s Border Wall” and declared that it’s time to get tough on illegal immigration and build more barriers.

But until now, they’ve all been Republicans. Enter “MAGA Maggie” Hassan.

That’s the nickname the National Republican Senatorial Committee gave Hassan after she posted a video of herself Tuesday standing in front of a section of the wall during a recent trip to the border. 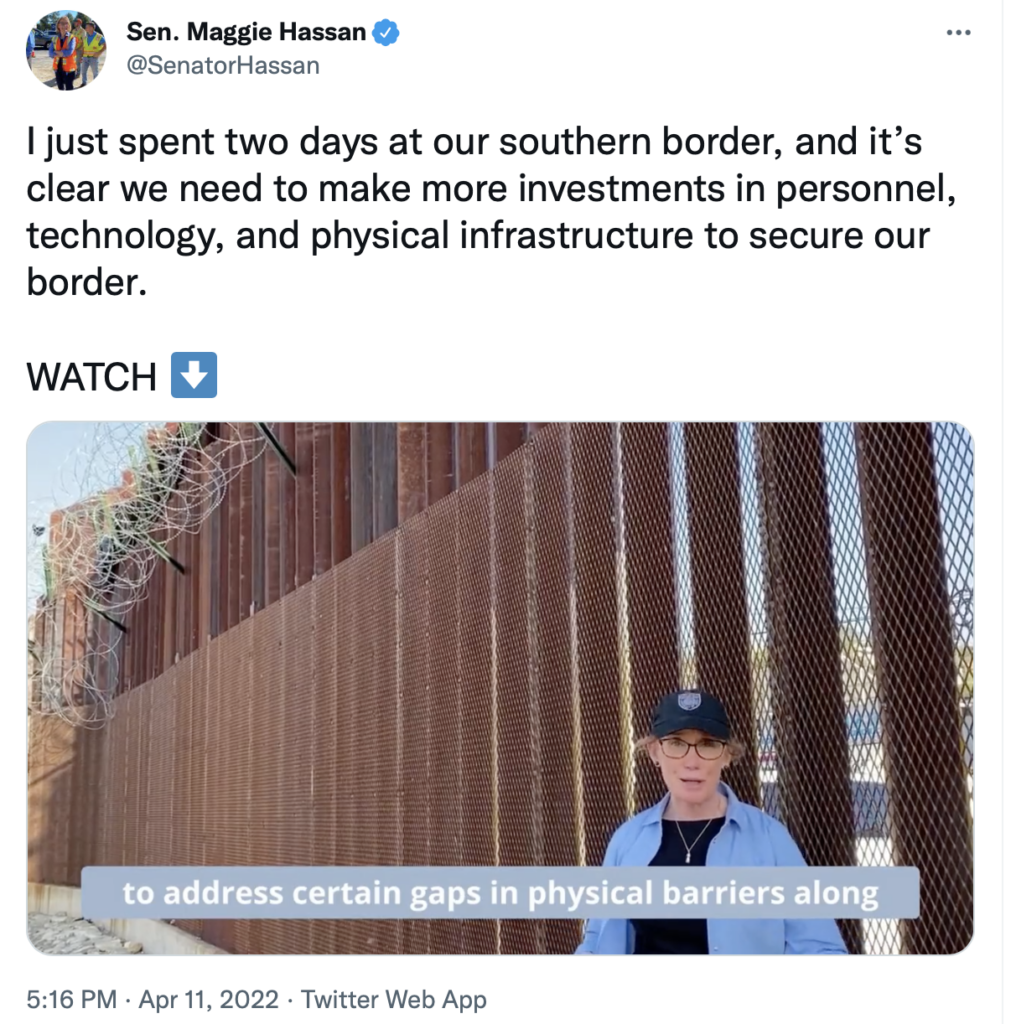 As the NRSC noted, this is a new approach from New Hampshire’s junior senator. “In 2021 alone, Hassan voted not once, not twice, but three times against legislation that would continue to fund wall construction at the southern border.”

And in 2018 when The Nashua Telegraph asked why she opposed the wall, Hassan replied: “We need to strengthen our border, but do it in a way that’s fact-based, not symbolic.”

No wonder Granite State activists on both sides of the aisle were so taken aback by Hassan’s embrace of the border wall and its “symbolism.”

Some New Hampshire progressives were livid.

“Hassan’s focus on the southern border is pandering to conservative voters while blatantly disregarding the values of young, progressive who carried her to victory back in 2016, and it isn’t the first time,” said progressive activist Alissandra Rodriguez-Murray. “Demonizing immigrants at the southern border is not what Granite Staters need. We need champions in D.C. who will fight to establish an accessible pathway to citizenship for undocumented immigrants and refugees.”

Asma Elhuni of the progressive group Race Forward tweeted in response to Hassan’s video, “You do realize this strategy your [sic] using is no different than Trump’s ‘build the wall,’ right?”

And outspoken progressive Leah Cohen appeared to speak for many when she posted: “This f***ing sucks by the way!” 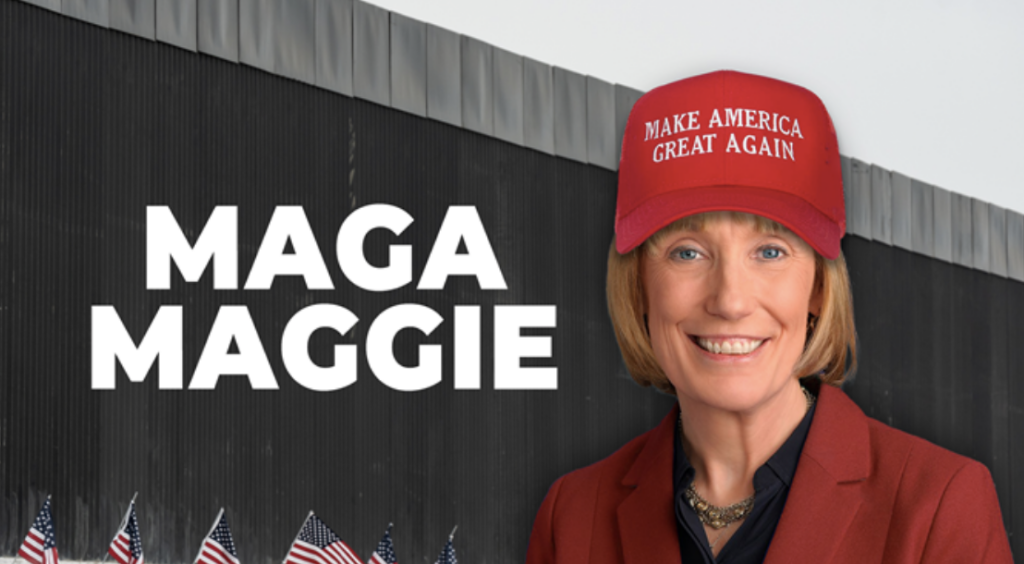 (From an NRSC press release)

Republicans, on the other hand, chose to mock the new “MAGA Maggie.”

“The 2022 version of Maggie Hassan is for more oil drilling, supporting Title 42, and now building a wall on the southern border,” said GOP Senate candidate Kevin Smith. “Hey, Maggie — when is your trip to Mar-A-Lago?”

Setting aside policy — as Hassan clearly has — the question is whether this sudden, unapologetic 180-degree turn will work?

One Democratic strategist speaking on background to allow them to speak freely believes it will.

“She is doing a perfect job of muddling an issue. Sununu does this so well. She will use this to neutralize the ad attacks that will come. White suburban moms will need this [pro-border-wall security] message. She will hit Democrats with a base message that will fire them up.”

But Hassan’s “Build the Wall and Drill, Baby, Drill” approach is just as likely to have the opposite effect: putting off Republicans who don’t believe she means a word of it, while demoralizing progressives in the Democratic base who believe she might.

Will a single independent voter who wants more domestic energy production and less illegal immigration really turn to Hassan — or any Democrat — for the solution? That’s hard to imagine. But it’s easy to see a 2022 Election Day when progressive Democrats under age 30 decide there is nothing on the ballot worth the bother.

Hassan supporters point to her massive money advantage. Who cares how many times she flip-flops if her GOP opponents don’t have enough money to get the message up on TV? She can run her border wall video on WMUR and laugh all the way to re-election.

Unfortunately for Hassan, if the national GOP sees the chance for a pick-up in New Hampshire, it will spend what it takes to get its message out. But even if that weren’t true, there’s another way voters will hear about Hassan’s problematic record: Her fellow Democrats.

State Sen. Tom Sherman (D-Rye) is running for governor. Rumor has it that yogurt magnate Gary Hirshberg might run, too. Rep. Debra Altschiller (D-Stratham) is running for state Senate, as is Melanie Levesque. And what do they all have in common?

They’re progressives. Progressives who’ll be running in the same election as Sen. Hassan. Which means they’re going to be asked by reporters if they agree with Hassan on demanding more drilling from Big Oil, or more “physical barriers” to stop unauthorized migration. And whatever those Democratic candidates say will be highlighted in their own races, where their Republican opponents will be more than happy to connect the dots right back to “MAGA Maggie.”

Maggie Hassan has spent years voting like a typical liberal Democrat in a state where being a typical Democrat is usually enough to win federal office. Unfortunately for her, 2022 isn’t one of those years.