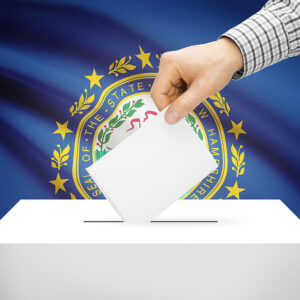 ANALYSIS: NH’s Primary Election System Is The Dumbest In America. It’s Time to Fix It.

When asked about the GOP’s poor performance in the 2022 midterm elections, Gov. Chris Sununu succinctly summed up the mood of the voters: “Fix policy later, fix crazy now.”

But fixing crazy, alas, requires a 12-step program. And it’s not clear if the Granite State GOP is even ready for step one: Admitting it has a problem. (The outcome of the upcoming state party chair and vice chair elections may offer a sign.)

Stupid, on the other hand, can be taken on more directly. And what happened in November wasn’t just the result of poor candidate quality. Granite State political hard-headedness extending back decades also played a role. The question now is whether Concord will finally learn the lesson and fix some of the structural problems that make the state’s process of picking candidates a political disaster.

Think about what happened to the GOP last year. Eleven candidates on the U.S. Senate primary ballot, a “winner” who got just 37 percent of the vote, picked just eight weeks before facing off against an entrenched Democratic incumbent who raised $41 million. There were 10 candidates in the NH-01 GOP primary and eight in NH-02. The “winners” each got about 33 percent of the primary vote.

You’ll be stunned to learn all the Republicans lost.

Everything about this process is stupid. And unnecessarily so. Fixing it won’t keep so-called “fringe” candidates off the ballot. But it would improve the odds of higher-quality candidates for voters to pick from in the general election. Which in turn would increase confidence in our Democratic system.

Here is a modest proposal to bring the electoral madness to an end.

Make Candidates Work to Get on the Ballot

Why is perennial loser Andy Martin on the ballot every two years for a federal office? Because … why not?

Getting on the ballot in New Hampshire for U.S. Senate is as easy as paying a $100 fee or turning in 200 signed primary petitions. For the U.S. House, it’s just 50 bucks.

That is why, in addition to Gen. Don Bolduc and state Senate President Chuck Morse there were nine other candidates for voters to sort through. Some, like Kevin Smith and Vikram Mansharamani, had name ID. But Martin? Or John Berman? Or Tejasinha Sivalingam?

So what? Bolduc won anyway, right? Yes, but if just the Martin and Berman vote had gone to Morse, he would have been the nominee.

And now that Democrats have figured out they can pour millions of campaign dollars into the GOP primaries — some of it illegally — and get away with it, why not throw some spoiler candidates on the ballot, too? What’s $100 when Sen. Chuck Schumer is spending $3 million boosting Bolduc in the GOP primary?

In other states, parties require candidates to show they have some level of voter support. In Massachusetts, they use the state party convention to find out if a candidate is credible. They need the support of 15 percent of the delegates to get on the ballot. In Florida, you have got to write a check for $8 grand to run for governor. In Kansas, signatures from one percent of the registered voters in your party are needed.

For federal and statewide candidates, a 15 percent threshold at the state convention is low. And it would force wannabe candidates to sell Republican committee members on their policies and political skills.

Then again gathering, say, 10,000 signatures to run for U.S. Senate isn’t impossible, but it isn’t easy. It would force candidates to get people excited about their candidacies, build a team and do some work. (Or find the money to pay people to stand in the Market Basket parking lot.)

There are multiple solutions, but the question is, after decades of cattle-call primaries, did nobody in New Hampshire notice this was a problem before? Fix it.

Setting aside the debate over “candidate quality” and Trump vs. non-Trump, there was one indisputable fact about the GOP nominees in the federal races last year. A majority of the voters in their own party voted for someone else in the primary. That’s what happens when 11 people run for U.S. Senate and there’s no minimum vote threshold.

It’s not necessarily a political death sentence to win with a plurality. Chris Sununu only got 30.7 percent of the primary vote in 2016 and went on to break the Democrats’ hold on the governor’s office. But it sure doesn’t help.

The obvious solution — after keeping the unserious candidates off the ballot — is to go “50 +1” as some other states do. You’re not the nominee until you win a majority of your party’s votes. In states like South Carolina, that means a runoff two weeks after the primary. (Ignore Georgia’s bizarre general election runoff and month-long campaign.)

The runoff rules, like the ballot access rules, could apply only to statewide and federal offices. It would force a majority of primary voters to commit to one candidate before the general election begins.

The problem, of course, is that New Hampshire currently holds its primaries about an hour and a half before the general election, and so…

This is a no-brainer. Forcing a party’s candidates to fight each other until the final weeks before the general election is nothing but pure incumbent protection. And in the era of recounts and lawsuits, it’s also a landmine waiting to explode.

What happens when the primary vote total comes down to a handful of votes, and a tray of ballots is found in Bedford a few days later? Or there’s a Windham-style “folded ballot” problem and the primary results are legitimately in question? A lawsuit could easily keep the party’s nominee on the sidelines until October. Or later.

Other states don’t have these problems. Why? Because they aren’t dumb enough to hold their primaries in mid-September. By the end of June last year, 36 states had already picked their party’s nominees. Only three states waited until September 13 — Delaware, Rhode Island, and New Hampshire.

Last year, the GOP-controlled legislature pushed two plans to change the primary date in 2022. The first would have moved it to the fourth Tuesday in June. The bill that was eventually vetoed by Sununu set the date as the first Tuesday in August. That would have put last year’s contest on the same day as six other states.

After November’s fiasco, Sununu said he is open to moving the primary, but not to August and the peak of summer vacation.

That leaves the Tuesday before public school ends, somewhere near the end of June. Or if House members are worried about campaigning during the busy end-of-session period in June, there is always the Tuesday before Memorial Day, leaving the nominees all summer to firm up support, fundraise, and focus their attention on the other team.

In Concord, the House is essentially split between the two parties. Nothing partisan is going to get done this session, anyway. Fixing the state’s election process will require bipartisan buy-in if it’s going to work.

There will rarely be a year that makes it more clear how awful New Hampshire’s current system is. Is this the year it finally gets fixed?

If not now, when?