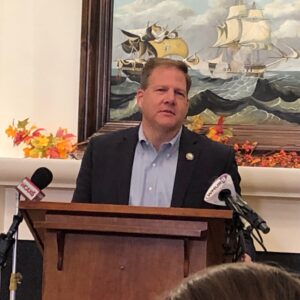 Republicans were shocked. They should have seen it coming.

For months, Gov. Chris Sununu has made two things clear: He really didn’t want to be a senator, and he isn’t done with politics. Granite State insiders and pundits in the media spent the past six months in spiraling speculation always avoiding those two facts. They were certain Sununu was either going to run for the U.S. Senate — “of course he’s running! — or going to “make some real money” in the private sector. Whatever the answer, he wasn’t going to run for governor again.

Even when word came his announcement was going to be made at 9:30 a.m. on a weekday morning, at a press-only event with no supporters –and at the historic governor’s residence at the Bridges House — still the politicos couldn’t see it. “He’s definitely running for Senate,” a veteran GOP strategist texted NHJournal just minutes before the announcement. “He has to.”

Sununu didn’t give McConnell the courtesy of a heads up. “He found out when you did,” Sununu said during Tuesday’s presser. Sources say it was to keep the news secret. (“If we told them, it would have leaked immediately,” one insider said.) But it could also have been a reminder of Sununu’s fundamental point about being a governor and not a senator.

When you’re governor, you only make the calls you want to make.

Sununu brags about being transparent, and it’s true — though not exactly the way he means it. Sununu is transparently pro-Sununu. If his goals line up with the Republican Party’s goals, as they did during the 2020 campaign, that’s great. But if they don’t, if the state party with a thin bench needs him to take on a weak, incumbent Democrat for the good of the GOP cause, but it’s not part of his plan — that’s OK with Sununu, too.

In a state like New Hampshire, loosely holding your partisan affiliations is smart politics. Sen. Maggie Hassan, whose entire brand is “generic Democrat” is about to find that out. When Sununu says “there are plenty of Republicans who can beat Hassan,” he’s not bragging about the talent of the GOP field. He’s simply pointing out the political weakness of Hassan.

In 2018, a blue wave washed through the Granite State. Sununu survived. He had a brand beyond the GOP.

In 2022, assuming trends continue, a red wave will hit New Hampshire. Why would any non-Democrat vote for Hassan? She won’t even have the fake “abortion ban” issue. She’ll just have Joe Biden, inflation, trillion-dollar spending deals, and vaccine mandates. She isn’t even independent enough to speak out against the Biden administration’s plan to pay hundreds of thousands of dollars to illegal immigrant families separated at the border — an absolutely killer issue among the blue-collar voters her party is already losing so badly.

For the moment, Democrats are determined not to learn the lesson. Their messaging on Tuesday was full of “whistle-past-the-graveyard” bravado.

Her successor, state party chair Ray Buckley, had the same message: “Chris Sununu signed an abortion ban, let the Republican Executive Council reject $27 million in pandemic funding, and supported the most extreme budget in NH history. His poll #’s are in free fall for good reason. I’m ready to elect a Democratic Governor in 2022!!”

Setting aside the factually-dubious allegations (“let the Executive Council reject?” Really, Ray?), does anyone believe Democrats think they’ll have more success in Biden Backlash 2022 than they did in Blue Wave 2018?

And who’s going to run?

U.S. Rep. Chris Pappas is widely viewed as the Democrats’ strongest candidate for governor. If Sununu chose the Senate route, Pappas would have had a chance to triangulate his way into an open seat. Now he has to run against Sununu, whose approval number advantage over Hassan — he’s +14, she’s -6 in the latest NHIOP poll — is identical to his margin with Pappas.

Once again, assuming 2022 continues to shape up like 2010 and Republicans have gale-force winds at their backs, how is this a good scenario for Pappas? He goes from “rising star incumbent congressman” to “guy who lost a governor’s race.” Why would Pappas do it?

Everyone’s talking about how hard it will be for Republicans to find a U.S. Senate candidate, but the real fun will be watching Democrats try to find another Molly Kelly or Dan Feltes. Nobody wants to be the next elected official forced to move to Iowa.

Sununu’s decision has Republicans scrambling, no doubt. But that’s because the party has left so much of the heavy lifting to the Sununus. The party’s empty-bench problem has been obvious for years. And, like Sununu’s plan to run for governor again, the party’s activists and funders should have seen this coming, too.

Instead, they spent Tuesday flailing about in a borderline panic, reaching for re-treads from the past like Sen. Kelly Ayotte and Bay Stater Scott Brown, because they have no candidates for the future. Building the party’s bench isn’t Team Sununu’s job. It’s the NHGOP’s.

Some Republicans were upset that Sununu seemed so happy Tuesday morning. Of course, he was happy. He’s doing what he wants. Republicans think he’s left them in a political hole, handing a winnable Senate seat back to the Democrats. They’re wrong.

The mistake woe-is-me Republicans are making is comparing the field of potential candidates to Sununu. They should be comparing them to Maggie Hassan.

Now you know why Chris Sununu is smiling.