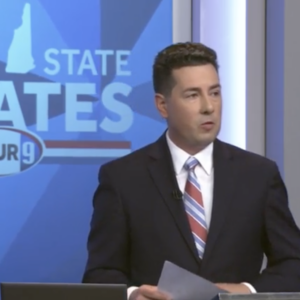 ANALYSIS: NH-01 Debate Was All About Location.

The most important element of Tuesday night’s First Congressional District GOP debate was that it occurred on the airwaves of WMUR. Which means a significant number of voters saw the five candidates debate for the very first time.

What these voters saw was familiar to the political junkies who watched these Republicans — Rep. Tim Baxter, Gail Huff Brown, Karoline Leavitt, Matt Mowers and Russell Prescott — face off in the first debate, hosted by NHJournal, a month ago. It’s the same trend from all of the debates thus far.

Mowers was competent, took the punches a frontrunner takes and didn’t get rattled.

Karoline Leavitt was sharp, smart and quick. She’s got political talent and, even at the age of 25, it shows.

Baxter was the most aggressive debater, using his platform of libertarian purity as a launching pad for his attacks. “Matt Mowers and Karoline Leavitt are two sides of the same corrupt coin,” he declared. Baxter repeatedly argued it is more important to be right than to win. Which is what candidates often say when they’re not going to win.

Brown was the most comfortable candidate and, it could be argued, had the best night. Now that she’s embraced her position as the pro-choice moderate in the race (she used the phrase “independent conservative”), she was more sure of herself when the abortion issue came up.

And Prescott was the nice guy with a solid resume and the powerful talking points guaranteed to win a GOP primary…. in 1994.

In other words, the status quo.

The topics were familiar, too: Energy prices, border security, who won the 2020 election and — of course — abortion. Moderator Adam Sexton took the debate into a cul-de-sac when he asked a follow-up question about one specific pro-life bill called “Micah’s Law,” also known as The Pain-Capable Unborn Child Protection Act. Asking about a specific bill whose details weren’t clear to the candidates didn’t work well.

Looking for memorable lines? Maybe Gail Huff Brown declaring, “My uterus is not for sale! It never has been and it never will be.”

The bad news for everyone not named “Mowers” is that, while the typical voter may have never seen the candidates debate before, it’s not the first time they’ve seen Leavitt and Co. on TV. They’ve seen them plenty — in ads.

Thanks to his financial advantage, Mowers has been able to maintain the lead in the ad wars, and he’s getting help from outside groups, too. Leavitt’s on the air with a solid buy, but she’s clearly getting outspent. And while Brown’s ad about abortion and choice has created some buzz, it’s not on a heavy rotation.

In theory, a big debate on a big stage gives candidates with less money the opportunity to even the political odds, to break out, to get another look from undecided voters.

Instead, Mowers walked into the WMUR debate as the frontrunner candidate who’s winning the air war, and he walked out the same way. Tuesday night didn’t change the fundamentals.

There are only six days left until Election Day.