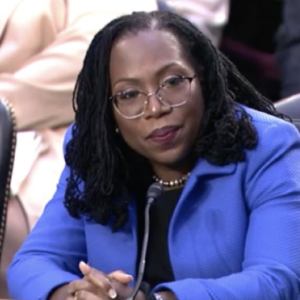 (via screengrab/Senate Judiciary Committee)
[IS] Opinions

ANALYSIS: KBJ’s Confirmation Hearings Were a Disaster for Dems. They Just Don’t Know It Yet.

Judge Ketanji Brown Jackson will soon be the newest member of the U.S. Supreme Court, and she is almost certain to get a handful of votes from Republican senators. So, if last week’s hearings are scored on the “did the nominee get confirmed” standard, they were a big win.

But if you are keeping score on the politics of Biden’s pick and her performance, then by nearly every measure Jackson’s nomination has been a disaster for the Democrats.

Worse? They don’t seem to know it.

The reasons are obvious to the average American — as obvious as the answer to the question, “What is a woman?” But they are utterly lost on the progressive elites of politics, punditry, and pop culture. Which, as more and more Democratic strategists point out, is their party’s fundamental problem.

Nobody’s debating Jackson’s qualifications or intelligence or integrity. The problem is the president who picked her and the progressives whose politics she must answer to. And the problem started long before Brown became the nominee.

On February 25, 2020, presidential candidate Joe Biden promised South Carolina Democrat Rep. James Clyburn — and the rest of America —  “I’m looking forward to making sure there’s a Black woman on the Supreme Court.” It may have been smart politics for a presidential candidate who desperately needed a big win in the Palmetto State’s primary, but polls have consistently shown Americans don’t like the idea of picking people for jobs because of their race or sex.

A recent ABC News/IPSOS poll found just 23 percent of Americans supported Biden’s pledge to exclude all candidates except Black women for the Supreme Court vacancy. Instead, 76 percent of voters — including a majority of Democrats — wanted Biden to “consider all possible nominees.”

The left-leaning media presented this as a reflection of American racism — “Stark Racial Gap In Views on Black Woman on High Court” read an Associated Press headline — but that’s not true. Most Americans agree with John Novak, a 52-year-old White Wisconsite quoted by the AP: “It should have been stated that we’re going to pick the best candidate who is going to follow the Constitution,” said Novak. “And then throw in that we’d like her to be a woman and woman of color.”

And so the very first takeaway for the average American from Jackson’s nomination is a confirmation of their view that Democrats are obsessed with the issues of race and identity. And according to Democratic strategists, that is a huge problem for the party.

The second takeaway from Jackson’s hearing was the debate over her sentencing in child pornography cases. Most cable news pundits believe Republicans wildly overplayed their hand and that Jackson gave cogent, reasonable answers to increasingly over-the-top questions. Conservatives like National Review’s Andy McCarthy criticized the GOP’s attacks on the sentencing issue.

But most Americans didn’t watch the hearings or analyze the nuance. They took away the impression that Jackson reflects the Democratic Party’s overall “soft-on-crime” stance. After three years of “defund the police” rhetoric and progressives appearing on TV defending rioters bashing in store windows, Jackson fed the pre-existing narrative on Democrats and crime. The “made for TV” antics of Republican senators with 2024 on their mind may have been painful to sit through, but they pushed out the message to casual voters that, yes, Democrats aren’t with you when it comes to crime and punishment.

The worst moment, however, was the “woman” question.

If you missed it — and if you only get your news from left-leaning media, you probably did — Tennesse Republican Sen. Marsha Blackburn asked Biden’s nominee about the Virginia Military Institute case, a major gender-parity ruling by the court striking down VMI’s males-only admissions policy.

Blackburn quoted Justice Ruth Bader Ginsburg’s majority opinion: “Supposed ‘inherent differences’ are no longer accepted as a ground for race or national origin classifications. Physical differences between men and women, however, are enduring.” Blackburn then asked Judge Jackson if she agreed with Ginsburg.

Jackson claimed she wasn’t familiar with the case — which was almost certainly untrue– and after receiving several non-responsive answers, Blackburn asked the nominee the now-infamous question:

“Can you provide a definition for the word ‘woman’?”

Jackson claimed — again, falsely — that she could not. “I’m not a biologist,” she said.

To which the average voter responds, “Who has to be a biologist to know what a woman is?” Worse — for Democrats, anyway — is that progressives responded with, “Being a woman has nothing to do with biology!”

The problem isn’t that Jackson isn’t smart enough to answer the “what is a woman” question. The problem is that, in the current progressive-dominated Democratic Party, she’s not allowed to.

American politics is fundamentally binary, and Democratic analysts like Dartmouth College’s Sean Westwood understand that.  “Misguided focus on unpopular social policies are driving voters away from the Democratic Party and are mobilizing Republicans,” he told the Times. “Democrats used to be the party of the working class, but today they are instead seen as a party defined by ostensibly legalizing property crime, crippling the police and injecting social justice into math classes.”

Judge Jackson’s hearing just made the problem worse. How is that not a disaster?