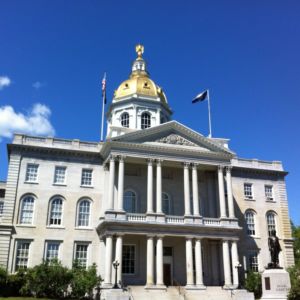 ANALYSIS: In Protest Fight, Will Sununu Win the Cul-de-Sac But Lose the Statehouse?

Gov. Chris Sununu’s announcement that he’s canceling his public inauguration ceremony over fear of anti-mask protesters is an unexpected ratcheting up of tensions between the GOP governor and ideological activists in his party’s base. And while the ReOpenNH wing of the NHGOP may be small, the Republican majority’s margin in the statehouse is even smaller.

With the “NHGOP in disarray” narrative already building since the death of Speaker-elect Dick Hinch, some in the NHGOP are worried about the impact of Sununu echoing Democrats’ anti-gun rhetoric just days before the new legislative session begins.

The conflict started when opponents of Sununu’s statewide mask mandate took their protest to his private home in Newfields. While demonstrating outside the homes of public officials has become more common nationally, particularly on the left, many people view it as unnecessary and obnoxious.

“Gov. Sununu has school-age kids. I know I would be angry if a protestor carrying a gun was hanging around my house calling me a tyrant,” said GOP strategist Pat Hynes.

In response to the demonstrations, the town Select Board — including the governor’s brother Selectman Michael Sununu — passed an ordinance banning “picketing” outside private homes. At least three members of the Sununu administration testified on behalf of the law, which took effect last week.

Anti-mask activists targeted by the new ordinance promptly announced a planned “candlelight vigil” last Monday night. About a dozen demonstrators showed up on the governor’s cul-de-sac and were confronted by more than 20 state and local police. Nine people were cited for violating the picketing ban and one person — Skylar Bennett, 38, of Concord — was charged with disorderly conduct and criminal trespass.

Like many New Hampshire citizens, particularly those involved in politics on the right, Bennett was armed at the time. For longtime observers of Granite State politics, this is hardly surprising. In a state where Republican lawmakers insist on the right to carry guns on the floor of the statehouse, armed and protesting is a relatively common occurrence.

However, Sununu seized on this fact to announce that the risks of holding a public inauguration ceremony are simply too great.

“My first responsibility is ensuring the safety of my family and our citizens,” Sununu said in a statement. “For weeks, armed protesters have increasingly become more aggressive, targeting my family, protesting outside my private residence, and trespassing on my property — an outdoor public ceremony simply brings too much risk. We do not make this decision lightly, but it is the right thing to do.”

Sununu also described Bennett as “an armed individual trespassing in my backyard [who] was arrested carrying two dozen rounds of ammunition,” raising the specter of an imminent threat. This outraged protesters, who say Sununu is using the language of anti-Second-Amendment Democrats to smear them.

“With complete certainty, we can confirm that there have never been any incidents involving Absolute Defiance or any other group of protestors trespassing on the Governor’s property, nor have we ever had a protest with individuals open carrying,” spokesperson Brennan Christen told NHJournal. “We categorically refute the Governor’s false claim that ‘armed protestors’ (especially noting the plural usage of that word, which is patently false) trespassed in his backyard. Video evidence refutes it, and so do all who attended the vigil.

“One man lawfully following instructions from the police to walk on a paved public walkway to the country store does not constitute aggression, nor does it constitute trespassing.”

One NHGOP activist noted the expressions of support Sununu is getting from Democrats like state party chairman Ray Buckley, who described the protesters as “truly unhinged gun-toting citizens.” Sununu isn’t making any friends on the right, he said.

On the broad political issue, Sununu is probably in his favorite spot — in the center. And many Granite Staters have taken to social media to express their support for Sununu, their disdain for demonstrations targeting a family home, or both.

But what happens when the legislature is in session and Sununu needs House Republicans behind him? It takes just 13 defections to deny Republicans a majority. In a caucus already struggling with unity issues, how is echoing the ‘nutty-people-with-guns’ message today a winner for Sununu next month?

And then there’s the big question: Does Gov. Sununu really believe New Hampshire politics have become too dangerous to hold a public inauguration?  That’s certainly the message being spread by the national media with headlines like, “NH Gov Sununu Cancels Public Inauguration, Citing Threats” in news outlets such as the Washington Post, National Public Radio and The Hill, among many others.

Has anyone asked Taylor Caswell, Sununu’s Commissioner of Business and Economic Affairs, what he thinks of media coverage like this?

The anti-lockdown activists sound genuinely stunned by Sununu’s comments. They know many of their fellow Republicans don’t agree with them on the COVID issue, and they have — or had — given up on plans to file legislation calling for Sununu’s impeachment over his use of executive power. They’re not shocked to learn they’re not a majority.

But hearing rhetoric from a Republican governor and his spokespeople that’s indistinguishable from the Granite State Progress Twitter feed is a new level of conflict.

Are a handful of obnoxious protesters outside Sununu’s house really worth all this?