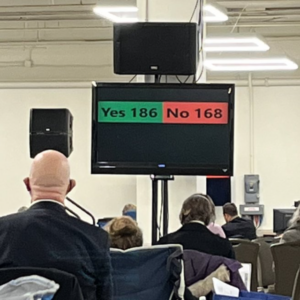 New Hampshire Democrats and their partisan allies at the ACLU have been on the attack for weeks over the new “gerrymandered” congressional map passed by the N.H. House Republican majority on Wednesday. And that’s just fine with the GOP.

You would have to poll long and hard to find a single Granite State voter who cares enough about the shape of district maps to change their vote over it. For every Democrat complaining “Why is Portsmouth in the same district as Berlin?” a Republican responds “So having Salem and Berlin together was better?”

So while opponents like the Fair Maps Coalition call the maps “a power grab by a majority party” that “will undermine free and fair elections,” Republicans just smile and move on.

The same with the federal election bill Democrats have embraced. Democrats are hoping to use the horrors of January 6 to bully the GOP into submission, there’s no scenario in which 10 U.S. Senate Republicans will join Democrats to back a bill federalizing local voting rules. In part, it’s a principled stand on behalf of federalism and local control. But Republicans are also shrugging off the Boston Globe editorials and Democrat accusations because they know most voters just don’t care.

How many Granite Staters went to bed last night worrying about whether there would be 14 days vs. 7 days of early voting? How many voters are losing sleep over whether New Hampshire will be forced to allow ballot harvesting, or have the feds decide if they’re allowed to have voter ID?

The more time Democrats like Sen. Maggie Hassan and Rep. Chris Pappas spend talking about “dangers to democracy” and flipping on the filibuster, the happier Republicans are. Because it leaves the issues voters actually care about to the GOP.

It’s not hard to tell what’s on voters’ minds. Poll after poll shows they’re sick (no pun intended) of COVID, they’re worried about rising prices and they’re done with teachers unions trying to shut down classrooms. They’re tired of pulling into a drive-thru and finding out their local fast food joint is closed because they can’t find enough willing employees.

Voters want people back at work, they want their kids back in school, and they want the world to get back to normal. Fighting over whether Portsmouth or Salem are in the same congressional district as Berlin isn’t breaking through as a top 10 — or top 100 — issue. Nether is the “Freedom to Vote” Act.

New Hampshire Democrats should ask themselves this: Which headline got more reaction from their local constituents — a debate over legislative districts in Concord, or the teachers strike shutting down classrooms in Chicago?

Gerrymandering is just an obscure, oddball way to say “politics.” The same with voting rules and absentee ballot regulations. Polls show around 70 percent of Americans believe the country’s on the wrong track. A recent NHJournal poll found Granite Staters feel the same way. And it’s not because voters can’t find their house on a legislative map. It’s because they can’t find a COVID test, and the president of the United States is telling them to “just go to Google.”

Republicans are going to get roughed up over the next couple of days. Lots of “democracy in peril” rhetoric and TV pundits dropping the F-bomb (“fascism.”) Given the party’s cowardly refusal to confront President Trump over his role in the January 6th riots, the criticism is well deserved.

But soon it will be January 16th, then July 4th, then the first Tuesday after the first Monday in November. And nobody will be voting on what happened at the Capitol nearly two years earlier, or a newly-drawn map.

They’ll be voting on COVID, crime, and the economy. On open classrooms and closed businesses. All topics notably absent from the Democrats’ daily talking points.