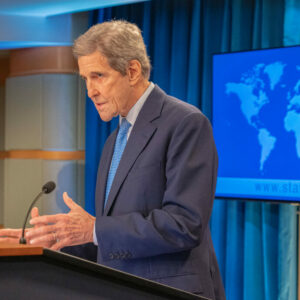 Voters’ historic beatdown of the GOP in November’s midterms has emboldened the Biden White House to embrace more policies pushed by progressive Democrats, from President Biden’s attack on semi-automatic weapons to renewed support for a $500 billion student loan bailout.

Perhaps the biggest shift to the left is Biden’s embrace of “climate reparations,” which would force U.S. taxpayers to pay billions to governments in poor countries to make up for the alleged “loss and damage” they suffer from natural disasters environmental activists blame on climate change. And, as The Wall Street Journal notes, that is on top of the $100 billion wealthy nations like the U.S. have already pledged to fund each year to help poor countries reduce emissions and adapt to climate change.

The administration will need Congress to sign off on the spending. Will the New Hampshire delegation be on board?

Setting aside the dubious science behind the reparations plan (the number of hurricanes is flat or falling, and they are not getting stronger, either), the politics are questionable at best. Just days after the midterm elections, Biden’s Climate Envoy John Kerry declared flatly that America would not join an international effort to create a “climate reparations” fund.

“It’s a well-known fact that the United States and many other countries will not establish… some sort of legal structure that is tied to compensation or liability. That’s just not happening,” Kerry said. Less than two weeks later at the 27th United Nations (U.N.) Climate Change Conference (COP27), the Biden administration reversed course and signed on to the proposal.

“We are also pleased to join vulnerable countries in one of the major outcomes here [at COP27]– a decision to establish funding arrangements related to loss and damage, including a fund as part of what many are calling a ‘mosaic’  of responses,” Kerry said in a statement last week.

American taxpayers, already paying soaring energy costs, may not be as pleased with the prospect of sending tax dollars to other countries as part of the fight against climate change. Americans have had more success in reducing greenhouse gas emissions on a per capita basis than any other major economy. Meanwhile, China is scheduled to add more new coal-fired electricity generation than the rest of the world combined.

China has refused to fund the reparations. That leaves a larger bill for U.S. taxpayers.

And while the Biden administration has shown a willingness to spend money without congressional authorization — in the case of the student debt bailout, almost certainly illegally — it would need Congress to appropriate the reparations funding. The question is how much it would cost and whether the White House will have the votes.

At least one study claims the annual cost of climate reparations could reach close to $600 billion by 2030 and eventually hit $1 trillion a year in 2050.

Republicans have already expressed their opposition. Sen. Kevin Cramer (R-N.D.) calls said, “It might be the most absurd international policy I’ve ever heard of. We can’t afford to give more money to other people, especially for reparations as some sort of a guilt payment, because we’re more developed than they are.

“In fact, what they ought to do is say, ‘Thank you very much United States of America for providing security, for stabilizing our governments, for defending us, for feeding us.’ Instead, they demand payments and John Kerry is dumb enough to sign off on it,” Cramer said.

None of the members of New Hampshire’s federal delegation would respond to a request for comment on whether they support the plan. And while other members of Congress have statements on their websites announcing their position on climate reparations, the topic is not mentioned on those belonging to the Granite State’s members of Congress.

Depending on the outcome of Georgia’s Senate runoff, Democrats will have an extremely narrow majority in the upper chamber. As a result, if New Hampshire’s two senators oppose the climate reparations plan, it would be D.O.A. And as chair of the Commerce, Justice, and Science Appropriations Subcommittee, Sen. Jeanne Shaheen could play an outsized role in passing — or stopping — the spending scheme.

New Hampshire ratepayers suffered the highest year-to-year increase in costs per kilowatt-hour (kWh) for electricity, up 39.2 percent in September over a year ago. That was on top of projected increases for home heating oil of 27 percent, and a 28 percent hike in the price of natural gas. Do those homeowners and ratepayers want to kick in more tax money to subsidize energy costs in other countries?

With big wins at the ballot box earlier this month, Granite State Democrats may be willing to join Biden in his push to the left. But if the voters were voting against a Trump-dominated GOP and not in favor of Democrats’ policies, backing a plan to pay climate reparations may not play well back home.