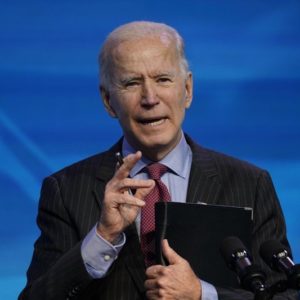 Annie and Chris, hope you enjoyed impeaching Donald Trump. It will be your last easy vote for a while.

Despite the media coverage, Speaker Pelosi and Co. impeaching President Trump wasn’t the big news of the political week. First: Been there, done that.

Second, as many Democratic House members admitted during their one-minute floor speeches, they’ve been trying to impeach him since 2017. Trump’s behavior certainly gave Reps. Kuster and Pappas good cause, but voting to oust a politician who lost your state by eight points is hardly “Profiles in Courage” material.

No, the big news came Thursday night, when President-elect Biden took to the podium on prime time TV to lay out his $1.9. trillion COVID-19 spending plan. This should not be confused with Biden’s $1 trillion infrastructure plan or his $2 trillion green energy plan — all of which he hopes to pass in the first 100 days.

Which means this is just the taxpayer-spending appetizer.

Giving away $800 billion in direct stimulus payments and enhanced unemployment benefits will be easy. As a Biden source told the Wall Street Journal, Joe doesn’t believe this is the time to worry about deficit spending, even as the debt approaches $30 trillion. And millions of Americans, getting free money in the mail, are happy to agree.

But the plan also includes a $350 billion bailout of state and local governments, many of them poorly governed and chronically in debt. What happens when it’s time to ask New Hampshire taxpayers to send their money to rescue states like Illinois and New Jersey that have mismanaged themselves into a hole?

Are these winning issues in New Hampshire?

“We will get right to work to turn President-elect Biden’s vision into legislation that will pass both chambers and be signed into law,” Sen. Chuck Schumer and House Speaker Nancy Pelosi (D., Calif.) said in a joint statement.

“I look forward to reviewing the details of the proposal,” Sen. Maggie Hassan said in a statement, “but I am glad that President-elect Biden announced significant investments in vaccine distribution, additional direct relief to families and businesses, and much-needed aid to state and local governments that will help prevent further layoffs of teachers and public safety personnel.”

She did not endorse Biden’s plan. And neither Sen. Jeanne Shaheen nor Rep. Pappas had released a statement late Thursday night.

The one exception is Kuster, who praised the Biden plan in general and the bailout for states in particular. Taxpayers who’ve rejected state sales and income taxes are unlikely to be happy about covering the spending shortfall for high-tax states.

And there’s more to come. According to reports, Biden considered including his $370 billion plan for student loan forgiveness in this proposal, but he’s holding off for now. Biden also has a green energy proposal that’s more aggressive than President Barack Obama’s. Not to mention proposals from their fellow congressional Democrats, like Rep. Alexandria Ocasio-Cortez’s suggestion of a commission to look for ways to “rein in” our media.

As hard as it may be to believe, Donald Trump will soon be gone. And when he is, Democrats won’t have the Donald to distract from the specifics of their policy decisions. They’ll have to defend these proposals and, eventually, vote for them.

No wonder Democrats are talking about a Senate impeachment trial months from now. Ironically, they may be the ones who want to keep Trump around.