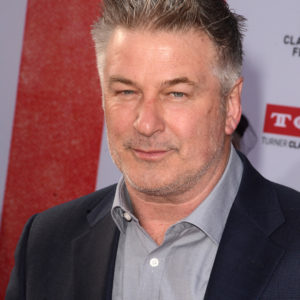 Alec Baldwin is well-known for his portrayal of Donald Trump on SNL, but does he want to be the next TV celebrity president?

Baldwin will be in New Hampshire Sunday night hosting the state Democratic Party’s “Eleanor Roosevelt” fundraising dinner. Meanwhile, back in Washington, DC the speculation has begun over a potential Baldwin White House bid.

“Do I think Alec Baldwin is likely to be the nominee? No. But will he run? He may,” veteran Democratic strategist Bob Shrum told the Washington Post.

Baldwin has publicly discussed the idea, most notoriously on the Howard Stern show in June when he declared “If I ran, I would win. I would absolutely win…one-thousand percent.”

New Hampshire Democrats are doing their part by giving the actor a high-profile opportunity to address the party faithful, despite his problematic behavior.  Just days before his appearance, for example, Baldwin declared “Ever since I played Trump, black people love me. They love me. Everywhere I go, black people go crazy. I think it’s because they’re most afraid of Trump.”

In New Hampshire, openly-gay state senator Dan Innis called on Democrats to boycott the party fundraiser. In a letter to the editor in the Portsmouth Herald, Sen. Innis wrote:

“Mr. Baldwin has a long history of making abusive comments to and about women, including his own daughter, as well as making homophobic remarks that I find personally offensive. But in the minds of New Hampshire Democratic Party leaders, especially party chair Raymond Buckley, apparently doing an (admittedly pretty funny) impression of President Trump is enough to forgive Mr. Baldwin for years of making bigoted and homophobic remarks. One would think that Buckley, an openly gay man, would pause to consider the impact of abhorrent remarks like those made by Alec Baldwin on the LGBT community.”

Democratic candidate for Congress Chris Pappas, who frequently touts the fact that he would be the first openly-gay NH representative in Congress, has yet to make a public statement about Baldwin’s appearance at the New New Hampshire Democratic Party event, or his history of homophobic attacks.

For a Democratic party that’s promoting outreach to women and advocating gay rights, choosing Alec Baldwin to speak at a high-profile fundraiser just weeks before the November election is an interesting choice, too say the least.

In 2013, Alec Baldwin was fired from his MSNBC political talk show after launching a “foul-mouthed, homophobic rant” against a news photographer, calling him a “f****t.”

Last year, during the peak of the #MeToo story–and allegations of sexual abuse by powerful Hollywood figures close to Baldwin–the SNL actor was essentially forced off of Twitter due to reaction from assault victims and their allies to his comments on the controversy.  In one interview, Baldwin suggested that Rose McGowan and other women who were victims of sexual assault and took settlements afterwards “delayed justice” for the perpetrators and “set back the cause of change.”

In 2012, Baldwin called a NY Daily News photographer a “nutty b*tch” on Twitter.

And of course everyone has heard the infamous tape of Baldwin screaming at his then 11-year-old daughter (“You are a rude, thoughtless little pig. You don’t have the brains or the decency as a human being.”)

In a speech last November, Baldwin admitted: “I certainly have treated women in a very sexist way. I’ve bullied women. I’ve overlooked women.”  When he takes the podium in Manchester on Sunday, Baldwin will be speaking to a party with four Democrats current representing New Hampshire in Washington, DC–all of them women. And yet not one of them has publicly objected to the party’s decision to invite Baldwin as its special guest.

Is this yet another example of the power of celebrity “trump”-ing all other concerns in the politics of 2018?