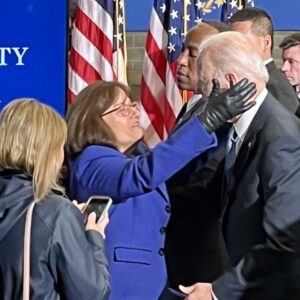 AGER: Biden’s Performance Will be Kiss of Death for NH Dems in November

New Hampshire is poised to retain its historic 2020 Republican wins at the state level in the 2022 midterms. During the last election, the State House flipped from a Democrat-controlled House, Senate, and Executive Council to Republican-controlled, thus earning the distinction of being the only state in the nation to flip its political party majority. Many expect the state-level Republican majority to either hold steady or increase in the upcoming election. What is looking even more likely is that these Republican gains will also permeate into New Hampshire’s federal delegation, which is currently held by four Democrats.

Some of the greatest liabilities for the all-Democrat federal delegation are the abysmal policies playing out across our state and nation, courtesy of President Joe Biden. As a measurement of this administration’s poor performance, Morning Consult Political Intelligence survey data gathered during the second quarter of 2022 shows Biden’s job approval rating is minus -15 points in New Hampshire.

Let me repeat that: Minus 15 percent.

Adding to this political headwind is the fact that Granite Staters also have a more negative view of Biden than in any other state in the Northeast. This data is an ominous sign, not only for the weak junior Democrat Sen. Maggie Hassan but also for her fellow New Hampshire Democrats in Congress – Reps. Chris Pappas and Ann Kuster.

It is a well-understood fact that a weak incumbent candidate attracts many competitors, and this year is no exception. As an example, in the Senate race, there are 10 Republican candidates vying for the nomination to succeed the underperforming Hassan. Her weakness clearly has attracted a large field of challengers.

Even after spending millions on advertising, Hassan’s poll numbers have continued to decline. To make matters worse, voters are refusing to be fooled by her spontaneous, magical election year policy conversions as a supporter of increased fossil fuel production, fiscal responsibility, and building more of the border wall.

This sudden switch in Hassan’s policy priorities is laughable to astute Granite Staters. Sen. Hassan cannot outrun the fact that she votes with Biden 98 percent of the time. She has proven that Chuck Schumer can always count on her to be a reliable Democrat vote – no matter how damaging the policy is to our state and our nation.

Hassan opposed ANWR drilling, the Keystone XL pipeline, fracking, and any expansion of natural gas production in the U.S. As governor, Hassan even signed a 22 percent gas tax hike into law. And to put a finer point on how she wishes we could all forget her past actions, one of her political ads even takes credit for a fiscally responsible budget that passed …. despite the fact that she vetoed it.

The fallout from her magical policy reversals is evident, as recent polling has the race as a virtual toss-up with several of the current Republican candidates. The trajectory of the polls continues to trend against her.

In the House races, two-term Rep. Pappas is on the road to losing in the First Congressional District. The seat leans Republican, and it has flipped back and forth over the past decade or so. Pappas has voted with Nancy Pelosi 100 percent this term, and in his first term, he voted with her 99 percent of the time.  Adding to that are Pappas’s questionable viewpoints regarding our election system.

During a debate hosted by NHPR in 2020, Pappas referred to the Electoral College as an “antiquated compromise” and publicly stated our nation should consider abolishing the system. For a representative of New Hampshire to even suggest abolishing the Electoral College shows a fundamental naivete regarding the system that guarantees small states like ours have a voice in national politics.

A more intriguing race to watch is the normally reliable Democrat-leaning Second District, which the nonpartisan Cook Political Report has rated as a toss-up this year. The race has attracted attention from the National Republican Congressional Committee (NRCC), which has given it “on the radar” status.

This NRCC committee program recognizes strong Republican campaigns in key districts across the country and Kuster’s seat is one of them. It’s no secret that the three-term incumbent is now polling behind the “generic” Republican, and the renewed interest in the District is sure to bring additional resources to the eventual Republican nominee. The headwinds she must overcome at this point cannot be ignored.

The problem all of these Democratic members of Congress share is that they all have too much in common with Biden. They have hitched their wagons to the failing policies of this administration and, thanks to their voting record, Republicans have the receipts to prove it. Making matters worse, their favorability ratings are underwater and not coming up for air anytime soon.

This November, election-savvy Granite Staters will be standing by for their opportunity to ensure this is their last term in office.

Chris Ager is the RNC National Committeeman from New Hampshire. He wrote this for NHJournal.com.