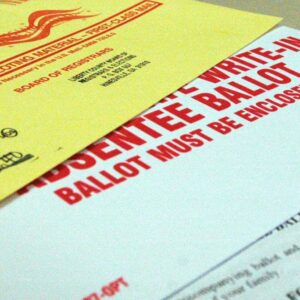 They had to take a second run at the ballots in Hillsborough County, but the New Hampshire Secretary of State’s Office announced Monday that all absentee ballots for the 2022 state primary election have been delivered to every city and town clerk’s office. Voters who request absentee ballots can obtain them from their local clerk.

“New Hampshire’s absentee balloting process is straightforward: The Constitution allows absentee voting for absence on Election Day, for physical disability and it’s been expanded for religious observances or if the voter is at the workplace for the entire time the polls are open,” New Hampshire Secretary of State Dave Scanlan told NHJournal. “And the legislature recently passed a clarification to allow it for individual who is in jail for a misdemeanor. If you don’t have one of those excuses, you can’t vote via absentee ballot.”

And while the national news is full of stories about states adopting no-excuse absentee balloting and expanded vote by mail, Scanlan said the New Hampshire election exceptions put in place to address the COVID-19 pandemic have expired.

“Our 2022 elections will be conducted under the same rules as the 2018 elections,” Scanlan said.

From the Secretary of State’s Office press release: “The last day local city and town clerks can accept absentee ballots filed by the voter in person is 5:00 p.m. on September 12, the day before the State Primary. All clerks’ offices will be open between 3:00-5:00 p.m. on this day. A voter’s delivery agent can deliver the completed absentee ballot in the affidavit and mailing envelope to the clerk at the polling place on election day any time before 5:00 p.m. Mailed-in absentee ballots can be accepted if the ballot is received by the clerk from the Postal Service by 5:00 p.m. on election day, September 13.

“With the state primary just around the corner, New Hampshire voters should remember that their local and state election officials continue to be their trusted source of election information. The Secretary of State’s Office is also happy to answer any questions voters may have about New Hampshire’s elections.”

The ballots for Hillsborough County had to be re-printed when it was discovered that Republican Brian Cole was on the ballot in the races for both Hillsborough County Register of Probate and state representative in Manchester. New Hampshire state law does not allow a person to serve in both positions. Cole chose to run for the House, and the ballots were reprinted to update that change.

Scanlan said that because New Hampshire has so many races and running for two offices is not unusual, conflicts are not uncommon, particularly in primaries where there are two sets of ballots. But those issues are usually caught before ballots are printed.

“Every election has its challenges. So we adapt,” Scanlan said.

Further information is available on the secretary of state’s website at: https://www.sos.nh.gov/elections/voters/absentee-ballots.

This link also contains instructions on requesting an absentee ballot. Voters can check the status of their absentee ballots using the Voter Information Lookup tool at https://app.sos.nh.gov/viphome