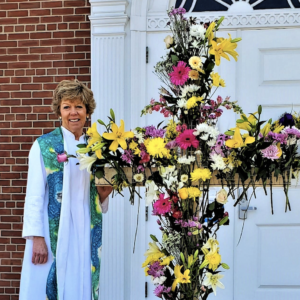 Local religious leaders are looking forward to Easter Sunday and say they want to inspire those who attend their services this weekend after a grueling year filled with grief.

Iglesia La Esperanza conducts services in Spanish. They can currently have up to 65 people at a time, due to social distancing requirements.

When asked what his message is for all New Hampshire citizens, De Jesus said he would like people to know there is light at the end of the tunnel.

“This last year has been a tough year, but I see the faithfulness of God in our communities,” De Jesus said.

New Hampshire and Massachusetts are among the least religious states in the nation, with only 33 percent of adults identifying themselves as “highly religious,” according to World Population Review.

That doesn’t mean people don’t believe in God. Statistics from the Pew Research Center show that in the Granite State, where politics is sometimes considered the religion, 43 percent of people say they are absolutely certain there is a God and are believers.

Rev. Laura Biddle, interim minister of Brookside Church on Elm Street in Manchester, said everyone is welcome to celebrate Easter Sunday with them, even if they do not consider themselves religious.

Biddle said the church has 10 acres and the ceremony will be held outside using speakers. She also said she would not be surprised if more people seek out a religious community after the pandemic.

“We’re all hoping our spiritual lives deepen because of this. It’s our spirit that connects us.”

Biddle said the message for their service at 10 a.m. on Sunday is going to be about holding out hope even in the worst of times.

Following the service, there will be an Easter egg hunt for children in 4th grade and under.

Sr. Pastor Rich Clegg at FaithBridge Church on South Main Street in Manchester said he has seen an uptick in participation lately. On Palm Sunday, they had a 25 percent increase in participation.

Typically, they do not see that bump until Easter Day, Clegg said.

Clegg said he knows people have been reaching out to others who have faith during the pandemic.

“Even people who wouldn’t affiliate with faith have reached out to those who do for support,” Clegg said.

FaithBridge Church can hold up to 60 people with social distancing at this time.

Rev. Michael Kerper, pastor at Saint Patrick Parish on Spring Street in Nashua, said they will have a reflective Catholic mass on Sunday morning at 7 a.m.

On Palm Sunday, 330 people attended mass in the church which has an official capacity of 800.

Kerper said over the past year, he has reflected on this question: “Why are we, as Christians, surprised that bad things happen?”

Kerper said there is an inevitable connection between suffering and resurrection, pointing out there would be no Easter without Good Friday. He added he hopes the parish can help comfort Catholics as they work through the pandemic, which is still isolating for many people.

“There’s also a spiritual suffering in isolation,” Kerper said. “People can call each other or go on Zoom, but it’s not the same.”

Kerper said there are still many Catholics who are not yet coming back due to COVID-19.

Catholics make up 26 percent of the Christian faith in New Hampshire. Mainline and evangelical protestants make up another 29 percent, according to the Pew Research Center.