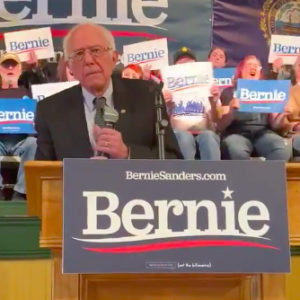 Sen. Bernie Sanders talks to supporters at a town hall in Derry, N.H. on February 5, 2020.
News

Is New Hampshire’s First-In-The-Nation primary still Bernie Sanders’ to lose? At least one person thinks so:

During a campaign stop in Somersworth, N.H., the former vice president took direct aim at Sanders, warning his fellow Democrats that nominating Bernie would bring disaster.

“If Sen. Sanders is the nominee for the party, every Democrat in America up and down the ballot, in blue states, red states, purple states and easy districts and competitive ones, every Democrat will have to carry the label Sen. Sanders has chosen for himself,” Biden said. “He calls himself a democratic socialist. Well, we’re already seeing what Donald Trump is going to do with that.”

Some 40 miles away at the Derry Opera House, an overflow crowd was gathering to hear Sanders speak. Several attendees told NHJournal they’d been to Sanders’ events before, but they wanted to show Bernie they have his back. The crowd included Sanders fans from Massachusetts, Maine, Virginia — and at least one person from France.

Those fortunate enough to get inside heard Bernie say that, despite inconclusive results, he believes he won the Iowa caucus (“I assume that one of these years that vote count will be completed,” he laughed). Yes, he was denied a victory lap, but no matter, Sanders said. “Just as in Iowa, our grassroots supporters have knocked on hundreds of thousands of doors in New Hampshire, and that is how we are going to win here next Tuesday.”

That’s certainly how the race is shaping up. Four years after a crushing 22-point win over Hillary Clinton, Sanders enjoys an 8 point lead in the RealClearPolitics polling average, and he’s led in 18 of the previous 19 polls. Biden backers point to a new poll from St. Anselm College finding the two tied at 19 percent, but the previous St. A’s poll (as the college is known locally) in November had Sanders at 9 points. A 10-point surge for Sanders fits the overall trend toward a Granite State win.

Waiting in line outside the opera house, New Hampshire Democrats tended to agree. 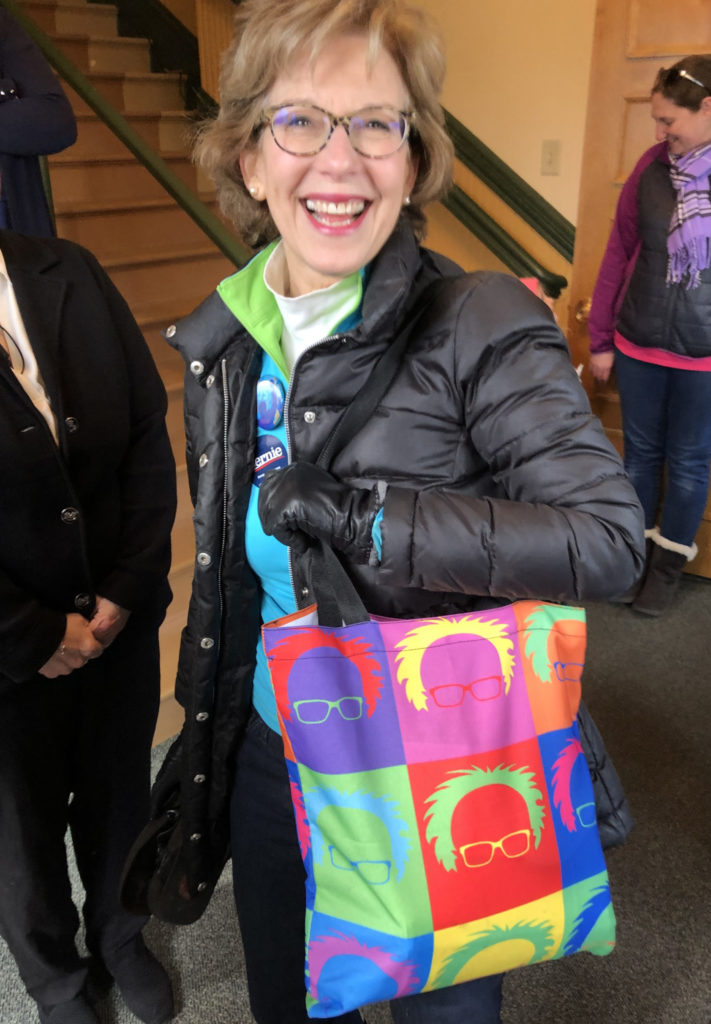 Lee Connor of Wellesley, MA sports her Bernie Bag at a Sanders rally in Derry, N.H.

“Oh, definitely Bernie,” said Deborah Bolduc of Derry. “He’s a strong candidate, and you can trust Bernie.” What about his fellow progressive Sen. Elizabeth Warren of neighboring Massachusetts? “I would like to see a woman president but I also want someone who can beat Trump, and I think Bernie’s the one,” she said.

Another factor in Sanders’ favor is the fading Biden campaign. For the first time since entering the race, some national polls have Biden tied with or trailing Sanders. Tuesday morning Biden confessed what savvy Granite Staters already knew: His performance in Iowa was a disaster. “I’m not going to sugarcoat it. We took a gut punch in Iowa,” Biden said. “But it’s not the first time I’ve been knocked down.”

The question is whether he can get back up, particularly in a state where the Democratic establishment candidate lost so badly in 2016.

“If Biden finishes fourth in New Hampshire after being fourth in Iowa, he’s going to get a strong push in the back to get out of the race,” says New Hampshire GOP strategist Jim Merill, a veteran of several presidential campaigns. “His South Carolina firewall will not hold if that happens.”

One advantage Biden still holds is on the question of which Democrat has the best chance of defeating Donald Trump. In a new Emerson College tracking poll, 54 percent of New Hampshire Democrats said the most important factor is to select a nominee with the best chance to defeat Donald Trump, while 46 percent want a nominee who agrees with them on issues.

In a new UMass poll released Tuesday, Biden leads Bernie on the “Defeat Trump” question 31 to 23 percent, with Warren way back at 14 percent. At the same time, Emerson found 42 percent of voters believe Sanders will be the eventual nominee, and 32 percent think it will be Biden.

“I like Bernie because he’s stable,” said Cheryl Przekwas of East Hampstead, N.H. “And he doesn’t seem like he lies. His voting record is more for the people.” Przekwas said her husband is a Trump voter (“We can’t talk politics at home,” she confessed) and that disaffected Trump supporters should consider switching to Sanders.

“He cares about the people and he’s got a record to prove it. What I’d say to Republicans is ‘just listen to him.'”

Jayshree Iyer and her 19-year-old daughter Rasika of Windham, N.H., were still undecided. “Most probably Bernie, but I’m torn between Elizabeth Warren and Bernie,” Jayshree said. “I like their views on education, healthcare and women’s rights.”

Asked who her neighbors are supporting, she lowered her voice and said, “I think some of my neighbors like Trump, but they are trying to disguise it.”

Across the street, local GOP state Rep. David Love wasn’t disguising anything as he waved his “Trump 2020” yard sign outside the Sanders event. Love said that the Democrats passing by were polite, showing an openness to partisan debate that Granite Staters take as a point of pride. “It’s one of the great things about living in New Hampshire, doing this every four years.

“I’m getting a lot of people driving by, honking their horns and giving me a ‘thumbs up’ — as opposed to different finger,” Love said.