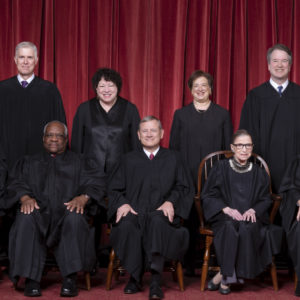 SHAPIRO: After Ginsburg’s Death, Will Democrats Pack the Court?

The big question looming over Mitch McConnell’s promise to hold a vote on Donald Trump’s nominee to succeed the late Justice Ruth Bader Ginsburg is whether the Democrats, should they win both the White House and Senate, will then add (and fill) more seats to the Supreme Court.

Although Joe Biden declined to join most of his fellow candidates for the Democratic presidential nomination in endorsing court-packing, the political pressure to do so may be too much to resist come January.

“I think the Kavanaugh nomination has put a fire under progressives,” said Caroline Fredrickson, then-president of the American Constitution Society (lefty counterpart to the Federalist Society) at the beginning of the primaries, noting that it’s “not written in stone that the court has nine seats.”

Indeed, the Constitution doesn’t specify the number of justices, but each expansion was historically accompanied by political mischief.

The Judiciary Act of 1789 set out six, but then the 1801 Midnight Judges Act would’ve reduced the Court to five at its next vacancy, to thwart the incoming president, Thomas Jefferson. In 1802, Congress restored the Court to six, a move Justice Samuel Chase opposed, which led to his impeachment (but not removal).

As the country grew, Congress created new circuits, with new justices appointed to each one. That all seems innocuous, but there were also political reasons for adding them, ones that didn’t always inure to the nation’s benefit.

A seventh seat was added in 1807, in part because Jefferson wanted to temper Chief Justice John Marshall’s Federalist proclivities, an unsuccessful maneuver given Marshall’s skill at swaying new colleagues. The eighth and ninth seats added in 1837 allowed a Jacksonian reshaping with the new justices supporting Chief Justice Roger Taney’s authorship of Dred Scott.

Then a 10th seat was added in 1863, in part to allow Abraham Lincoln more leeway.

That tenth seat was never filled and, to prevent Andrew Johnson from naming anyone — and at the request of Chief Justice Salmon Chase, who presided over Johnson’s impeachment trial — Congress in 1866 cut the Court to seven, such that the next three departing justices wouldn’t be replaced.

In 1869, however, after two seats had been lost to that attrition, the Circuit Judges Act fixed the bench at nine, a number that has survived 150 years, allowing the Court to get the stability and prestige it never had previously.

The most famous example of attempted court-packing is, of course, Franklin D. Roosevelt’s Judicial Procedures Reform Bill of 1937. The president was fresh off a massive reelection — he won 523-8 in the Electoral College — and unhappy about a series of rulings against his New Deal programs. He proposed adding a new justice for every sitting justice older than 70½, up to a maximum bench of 15.

The plan met bipartisan resistance in Congress and faced public opposition by the justices — including progressive icon Louis Brandeis — and FDR’s own vice president. It led to huge Democratic losses in the 1938 election, with Republicans gaining 81 seats in the House and eight in the Senate.

Still, Democratic Senate leader Chuck Schumer said over the weekend that “nothing is off the table” if Republicans fill the Supreme Court vacancy before Inauguration Day. But if Democrats think they’d be reuniting the country by compensating for Republican-appointed justices they consider to be illegitimate, then they deserve the political losses that such ends-justify-the-means radicalism has historically caused.

And if they think that packing the Court would restore “norms,” then they really don’t understand the nature of governance. Just as two wrongs don’t make a right, you don’t restore norms by transforming institutions, particularly when doing so would mean eliminating the legislative filibuster, which would open an even bigger can of worms.

Maybe some deal could be worked out whereby, if the nominee isn’t confirmed before the election and Democrats win big, Republicans would promise not to confirm if Democrats promised not to add justices. Otherwise, to quote Bernie Sanders of all people, “My worry is that the next time the Republicans are in power they will do the same thing.”

In the end, the Democrats ought to draw a different lesson from FDR. By mid-1941, just four years after court-packing failed, only two justices remained whom Roosevelt hadn’t appointed—and one of those, Harlan Stone, he had elevated to chief justice.

In a very real sense, then, FDR packed the Court the old-fashioned way, by maintaining control of the White House and Senate and waiting for natural attrition. Joe Biden, take note.