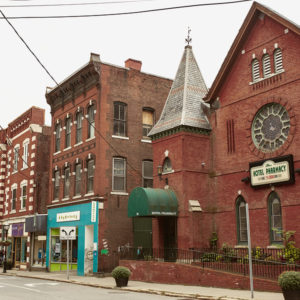 ST. JAMES: After COVID-19, New England States Have an Opportunity to Bring Jobs and Sustainability to Rural Communities

The United States continues fighting to contain the COVID-19 outbreak, with more than 100,000 diagnosed cases in New England alone.

Meanwhile, our economy has been dealt a near-knockout blow as businesses have been forced to shutter nationwide.

The economic fallout is being felt from major metropolitan areas to rural communities. The need for aggressive virus containment measures have decreased overall economic activity and increased our region’s unemployment rate, leaving many families facing an uncertain future.

However, in recent weeks elected officials throughout the country have started to shift focus from the initial emergency response to determining how and when portions of the economy can safely reopen.

For example, Vermont is allowing more manufacturing, construction and distribution employees to return to work, and both New Hampshire and Connecticut are looking to reopen some retail businesses before the end of the month.

And just as some parts of the region have been more deeply impacted by COVID-19 than others, reopening the economy will look very different from community to community.

A recent analysis from the Pew Charitable Trusts notes that — in a significant departure from other recent economic downturns — it may be rural areas that are best positioned to recover quickly from the COVID-19 shutdown.

Pew argues that’s due to a number of factors: For example, rural areas tend to be less dependent on industries that have been hardest hit, less tied to global markets and less conducive to virus transmission.

This suggests that rural communities throughout New England have the potential for a resurgence, but only if state policymakers make them a priority. That requires investing in agriculture and manufacturing, eliminating unnecessary regulation and red tape, and supporting entrepreneurship.

Best of all, these investments can be designed in a way that not only creates jobs but advances other public policy goals at the same time. Perhaps the best example is supporting the growth of sustainable business practices referred to as the circular economy.

A circular economy looks to shift away from the traditional, linear production process in which goods are manufactured, used and discarded, and towards a model focused on repairing, recycling and repurposing materials for use in future manufacturing. The model cuts down on waste and pollution, streamlines efficiency, and generates jobs and economic opportunity. Some estimates suggest the potential for 18 million new jobs over the next decade.

Rural communities are well positioned to be leaders in the circular economy, with space available to either build or repurpose industrial facilities and an often-underutilized workforce.

And employment opportunities would be accessible to individuals with a wide range of skills and educational background: jobs in manufacturing and recycling products, but also in distribution, sales, and marketing.

Building a circular economy should not be limited to individual states but expanded to a full regional strategy. Fortunately, COVID-19 has prompted a renewed sense of regionalism.

Already, governors from seven states — including Connecticut, Rhode Island and Massachusetts — have formed a joint task force to collaborate on safely reopening the region and formulating an economic recovery plan. Supporting sustainable businesses, circular manufacturers and recycling infrastructure should play a significant role in their recovery efforts.

In recent years, policymakers throughout New England have focused on an environmental agenda that limits consumer choice, adds costs for both small businesses and families, and pits sustainability and job growth against each other.

That approach has failed to address the endemic challenges facing rural communities and has turned many members of those communities against the very idea of sustainability.

The time has come for a better approach.

Growing a circular economy in rural New England would not only address short-term economic goals, it would combat long-term environmental challenges without slowing job growth.

As we begin to repair the damage from COVID-19, let’s build a new model that values both sustainability and economic opportunity.