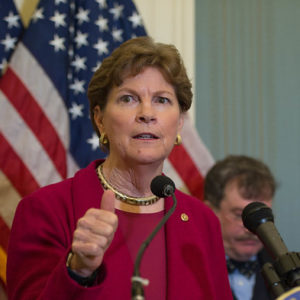 After $30 Million In ‘Dark Money’ on Her Behalf, Shaheen Wants It To End

Now Shaheen has a new challenge: Explaining the more than $30 million in outside spending on her behalf in the last two election cycles.

At a press conference on Monday, the incumbent Democrat framed the issue around “dark money,” which is money spent to influence campaigns by organizations not required to reveal the names of their donors. But in her statement, she conflates that money with all third-party spending, a common practice by advocacy groups from the NRA to Planned Parenthood.

“The ‘Clean Elections Agreement’ can discourage outside spending from dark money groups, prevent tactics that suppress votes, and block foreign adversaries from influencing our election,” Shaheen’s letter to Messner reads. “By joining me in signing it, you would agree… to disrupt the agenda of dark money groups by pledging to donate 50 percent of the cost of any outside advertisements run in your favor to a charity agreed upon by rival campaigns.”

According to independent reporting by Open Secrets, a 501c(3) nonprofit tasked with reporting “dark money” and outside spending in federal elections, Shaheen has benefited from more than $30 million of “dark money” as defined in Shaheen’s statement.

Does Shaheen owe $15 million in “back pay and penalties” according to her own “Clean Elections Agreement” and would she agree to send that funding to a group like The Heritage Foundation, Turning Point USA or another conservative nonprofit?

“Senator Shaheen is a professional politician that has perfected the art of talking out of both sides of her mouth,” Messner said in a statement. “The fact is, she’s been the beneficiary of nearly $30 million of outside money during these last two election cycles, yet here she is pledging to stand up to ‘Dark Money’ now?”

Messner responded by challenging Shaheen “to agree not to accept and to refund contributions or any other form of monetary support from individuals or entities based in the State of California.”

According to the FEC, Shaheen has reported over $1.2 million dollars in the past five years in public donations from California donors.

In comparison, Messner has reported about $50,000 in California campaign contributions.

“I await her response,” Messner said.

Veteran NHGOP strategist Dave Carney is more direct: “She is the poster child for slimy-funded campaigns. But no one in the media cares about where the money comes from that fattens their year-end bonuses, or even their paychecks!”

When asked by NHJournal about the millions spent on her behalf in the past, Shaheen declined to comment.