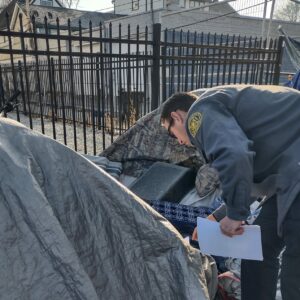 A Manchester city employee serves people in a homeless camp in downtown with an order to evict, January 9, 2023.
News

ACLU to Manchester: Cancel Your Plan to Clear Homeless Camp — Or Else

The New Hampshire ACLU sent a letter to the City of Manchester warning it to stop a planned eviction of a downtown homeless camp and to announce that decision by 10 a.m.  Friday — or else.

“We have reviewed the eviction proposal and ‘warming station’ made available by the City, including touring both the encampment and Center on January 10, 2023, and interviewing those directly impacted. For the reasons explained below, we ask that City officials postpone this eviction until a more permanent solution is established and to allow time for the City to consider the legal issues presented here,” the letter reads in part.  It was signed by Gilles Bissonnette of the ACLU-NH; Brandon Lemay, Housing Justice Organizer for the far-left group Rights & Democracy; and Lily Milwit of the National Homelessness Law Center.

Business owners, community leaders, and citizens have been demanding action from Mayor Joyce Craig and the city government for weeks as the homeless have taken over more and more public spaces. The surge in homelessness has been accompanied by an increase in crime according to data released by the Manchester Police Department, including a freewheeling brawl at the encampment the city is planning to clear on January 17. Two homeless people have died in Manchester in recent weeks, and last fall a homeless man from Mississippi was accused of stabbing a 75-year-old veteran to death on a Manchester rail trail.

The ACLU said the plan to stop people from blocking this public space at Pine and Manchester Streets is likely to run afoul of the law, particularly a ruling from the Ninth Circuit that the homeless must be offered shelter before being arrested for violating camping bans.

“Given the seriousness of these legal issues, we respectfully ask that any eviction be delayed until they can be fully considered and until more permanent solutions are established,” the organization wrote. “Given the imminence of the eviction at midnight when Tuesday, January 17, 2023, begins, we ask for a commitment to postpone this eviction by Friday, January 13 at 10:00 a.m.” [emphasis in the original]

Manchester’s growing homeless crisis has been an albatross about the political fortunes of Mayor Craig, who has seen the problem worsen on her watch. She joined a group of her fellow Democrats urging Gov. Chris Sununu to, among other things, send in the National Guard to address the homeless issue. And they laid at least part of the blame at Sununu’s feet.

But in an interview on WFEA Wednesday, Craig insisted she and her fellow mayors “weren’t blaming anyone.”

“But you know,” she added, “last time I checked Manchester was part of the entire state of New Hampshire.”

Asked about the letter, Manchester city solicitor Emily Gray Rice told NHJournal, “We are in the process of analyzing the letter and we have no comment at this time.”

The letter can be found here.