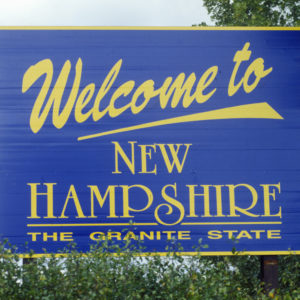 Like so many others I am not a native of New Hampshire. I was born and raised in New York and then lived three years each in Massachusetts, Maine, and New Jersey before settling in New Hampshire 40 years ago. I was a healthcare operations consultant for 43 years with clients in 37 states and D.C. over that period. I have 12 years of experience observing the inner workings of our state government as a state representative from Stratham.

Simply put, we live in the best state in the Union. I am asking all newcomers to this state not to vote for anyone who would advocate changing what makes us unique from the other states.

At the heart of New Hampshire’s ethos is no income tax, sales tax, or capital gains tax. Many out-of-staters move here to escape high taxes and state governments that squander their hard-earned money, then turn around and vote for elected officials who will vote for such things.

In my 12 years on the state House Ways and Means Committee, I was able to successfully fight off three broad-based taxes that would have led to out-of-control spending. As a matter of fact, two years ago we passed legislation to phase out our five percent interest and dividends tax over five years. In 2023 that tax will be reduced to three percent.

In calendar year 2026, that tax will be totally gone.

I always say we should not emulate other states but other states should be emulating us on matters of fiscal restraint and respect for all citizens’ hard-earned money. My observation from all the states where I have lived or consulted is that no matter how high taxes get there always seems to be an appetite to spend even more.

Please do not use the argument that if we had a broad-based tax we could lower our property taxes. That is the big lie repeated over and over again.

What happened in Connecticut (currently in a death spiral) and New Jersey are the two best examples.

Back in 1976, the Garden State had the highest property tax rates of any state. Their solution was to put in a two-tiered income tax; two percent for those who earn up to $20,000 and 2.5 percent for those with income above $20,000. The promise was the income tax would result in much lower property taxes. Let’s fast forward to today where we see New Jersey has a progressive income tax with seven brackets and top rate of 10.75 percent. With all of that extra money, New Jersey today still has the highest property tax rates of all the states. Beware of the big lie. When looking at the statistic, state and local taxes paid by a state’s residents divided by that state’s share of net national product, New Jersey is ranked very high at 45th highest.

Using that statistic looking at the New England states, New Hampshire is ranked 16th, Rhode Island is 36th, Massachusetts is 37th, Maine is 41st, Vermont is 47th, and Connecticut is 49th. Our closest Middle Atlantic state, New York, is ranked 50th. There is no question that when it comes to overall taxing New Hampshire is in good shape.

Newcomers to New Hampshire, why did you move here? Perhaps quality of life, a great environmental quality, economic opportunity, low crime rates, a well-managed state government, good infrastructure, or perhaps schools. My own experience is that of all the places I have lived or worked, New Hampshire has the best roads, I never worry about crime, our healthcare system is excellent, many educational options exist, corruption in any of our levels of government has not been a concern.

What do the numbers say? When comparing New Hampshire against the other 49 states, the Scholaroo 2022 Scores rank New Hampshire 6th best in overall education and the 5th best in the number of students per teacher. We are ranked 7th best in annual spending per student. The World Population Review 2022 Survey ranks us 4th best in quality of life with the least economic hardship of any state.

The U.S. News and World Report rankings of the 2022 Best States in America to live ranks New Hampshire 4th out of all states. Of the variables that make this up, New Hampshire ranks #1 when it comes to low crime rates, #2 for natural environment, and #3 for overall economic opportunity.

The point of all these numbers is to show with a small government and low taxes, we have a state for generations that has accomplished much and will continue to do so as long as the newcomers to our state embrace the values of this state and  elect legislators, executive council members, and a governor who also embrace these values. Traditional values of personal responsibility, hard work, and self-reliance, along with a philosophy of giving those in true need a hand up and not a handout, are at the heart of New Hampshire’s success as a state. The proof of our success is having the fewest number of citizen’s living below the Federal Poverty Level year after year. Current numbers show New Hampshire at 4.9 percent with the next best state, Minnesota, at 7 percent.

In closing, to give the reader a sense of how New Hampshire does what it does without broad-based taxes, our top ten general and education fund taxes or other revenue sources that make up 92.6 percent of these revenues in FY2022 were:

With a New Hampshire constitutional change decades ago, our road toll (gasoline tax) goes to a highway fund which can only be utilized for our roads, bridges, and Department of Safety (State Police). The beauty of that is that those funds cannot be raided and used for other priorities without changing the constitution.

If you are from Massachusetts or drive in Massachusetts, you are aware of the crumbling roads and bridges in need of repair. I would suspect that is because the gasoline tax revenue is siphoned off for other purposes budget after budget.

Please newcomers to the Granite State: Remember why you came here and vote for those who want to keep New Hampshire, New Hampshire.

Patrick Abrami represented Stratham as a Republican member of the New Hampshire House for 12 years. He wrote this for NHJournal.com.