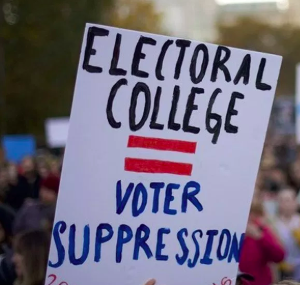 Last week a committee in the Democrat-controlled House of Representatives voted 20-0 against a proposal to upend the Electoral College. Rather than supporting a bill to commit New Hampshire’s EC votes to the national popular vote winner, the committee unanimously voted for an “interim study” status–or as the Concord Monitor’s veteran statehouse reporter Ethan DeWitt called it, “death with dignity.”

In one sense, the vote is hardly a surprise. Backing an end of the Electoral College in a small state like New Hampshire makes no sense. In 2000, for example, the Granite State’s four EC votes kept George W. Bush in the race and made the Florida “hanging chad” election possible.

In a popular vote system, New Hampshire would be nothing more than a distant suburb of Boston.

On the other hand, every New Hampshire frontrunner except Joe Biden has called for abolishing the EC system, and even Biden refuses to defend it. (Politico reports that as of October 15, Biden’s campaign refused to take a position on the EC either way). The liberal Concord Monitor newspaper editorialized that New Hampshire should dump it, while admitting that “the Electoral College system does give small, rural states a louder voice in the election process.” And both of New Hampshire’s Democratic U.S. Senators, Maggie Hassan and Jeanne Shaheen, want to dump it, too.

All of which leaves political observers puzzled. There is no polling to show that New Hampshire voters want to give up their influence in national elections.  And why would they? Elections are one of New Hampshire’s key industries. Bill Gardner isn’t a Granite State hero because of civics. It’s because the “First In The Nation” franchise is a moneymaker for the state’s hospitality, tourism and media industries. A national popular vote would undermine the very state-by-state election model that makes the #FITN work.

Gov. Chris Sununu understands the issue perfectly. “This is a bipartisan referendum against @SenatorShaheen and @SenatorHassan’s call to abolish the Electoral College,” he tweeted after the unanimous House committee vote. “That type of politically driven sentiment would only serve to destroy the voice of New Hampshire voters in the election of our national leaders.”

And while Rep. Wayne Moynihan (D-Dummer) is both his party’s vice-chair of the House Election Law Committee and a public supporter of Sen. Bernie Sanders — an aggressive advocate of abolishing the Electoral College– that didn’t stop him from voting against the proposal, too.

The 20-0 vote against a policy embraced by virtually national Democratic candidate (with the glaring exception of tech entrepreneur Andrew Yang) is a reminder of the vast chasm between candidates throwing out buzz phrases like “make every vote count” in support of a nebulous proposal, and legislators having to explain to constituents that they voted to give their four Electoral College votes to the candidate who lost New Hampshire.

It’s unlikely this issue will cost any Democratic candidates a vote in the New Hampshire primary. But it’s an issue — like support for gun confiscation, packing the Supreme Court and ending all private health insurance– that sends a message to moderate and swing voters that the Democratic Party supports extreme ideas that may not make a lot of sense for the Granite State.