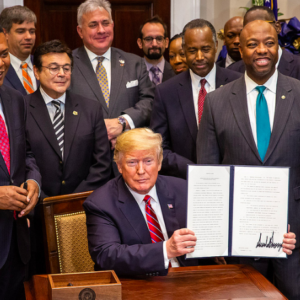 How do Republicans feel about President Trump facing a 2020 primary challenge?   The topic gets people pretty whipped up around the NHGOP headquarters, but most GOP voters aren’t nearly as upset by the notion.

Last August, an exclusive NHJournal poll found 40 percent of Granite State Republicans thought a primary would be a good thing—a pretty high number given Trump’s 71 percent approval rating among Republicans at the time.

Now a new poll of GOP Iowa caucus goers finds support for a primary challenge is even higher. According to a new Des Moines Register/CNN poll, 63 percent of Iowa Republicans say the party should welcome a primary challenge to the president, while just 26 percent say challengers should be discouraged.

And, as in New Hampshire, the party rank-and-file are lined up behind President Trump. He has an 81% approval rating, a 77% favorability rating and 67 percent of Iowa Republicans say they would definitely vote to re-elect him.  So despite the push to change the rules of the NHGOP, it turns out it’s possible to be both pro-Trump and pro-primary challenge.

It could be that Trump’s strongest supporters tend to be the same grassroots Republicans who’ve felt left out of the party process themselves and, therefore, don’t like the idea of candidates being excluded. Or it could be that the GOP base feels extremely confident about Trump winning a primary and so they’re unconcerned about a challenger.

On the one hand, their confidence in Trump is strikingly at odds with the other data, like his low approval rating (42.7 percent in latest Real Clear Politics average) and the fact that 44 percent of the country would like him impeached and removed from office.

On the other hand, it’s hard to see a Republican today who could mount a serious challenge. In an article entitled “Republicans Who Could Run Against Trump” at the liberal New Yorker magazine, Amy Davidson Sorkin allows herself a flight of fancy through the potential POTUS challengers and the results are….uninspiring.

“Perhaps a way to speed matters up is to put some more names on the table,” she writes. “Mitt Romney, once a vocal opponent of Trump, was just elected to the U.S. Senate from Utah, and so he has an active political operation. Romney’s old running mate, Paul Ryan, who is retiring as Speaker of the House, and liked to hint, when convenient, that he was not happy with the President, might want to prove that he meant it. Nikki Haley, the former governor of South Carolina, left her job as Trump’s U.N. Ambassador with her dignity intact.”

Then for good measure, Sorkin throws in a litany of names: Sens. Lisa Murkowski, Susan Collins and Ben Sasse. Govs. Charlie Baker, Phil Scott  and Larry Hogan. Plus liberal NYC mayor Michael Bloomberg –who’s a Democrat—because…well, why the hell not?

In other words, the New Yorker’s mental experiment unintentionally proves the pro-Trump thesis: As of today, he’s untouchable.

There is, however, another question: What kind of Republican would have the best chance?

For example, retiring Tennessee Sen. Bob Corker is a longtime conservative from a solidly red state who has a strong resume on foreign policy.  He gave a vague, non-committal answer over the weekend about the possibility of running (“I want to get away from [DC] and think about that”).  On paper, he’d be a pretty good POTUS candidate.

But the new poll of Iowa Republicans found that Corker would get crushed. And for exactly the reason so many media liberals want him to run in the first place: He hates Trump.

In the poll, 40 percent of GOP caucus goers said they would “never” vote for Sen. Corker, while only 11 percent said they would even consider it. The same for other outspoken Trump haters like Kasich (39 percent would never support him) and Flake (47 percent say “no way”).

However, these same GOP voters were far more open to the idea of possibly supporting Rubio (59 percent), Romney (53 percent) and Haley (49 percent.) What do they have in common? They’ve all made their peace with President Trump.

In other words, the ideal challenger to Trump wouldn’t be one of his mortal enemies but one of his pragmatic allies—someone who voters understood wasn’t a big fan of the president but decided to find ways to stay positive rather than preaching doom and gloom to the GOP faithful.

Of course, as soon as one of these Republicans announced their candidacy they would immediately become Trump’s mortal enemy, too,  and their approval inside the party would plunge.

And that is the political Catch-22 that’s going to keep President Trump from facing a serious primary challenge as long as he can keep the GOP grassroots majority on board.