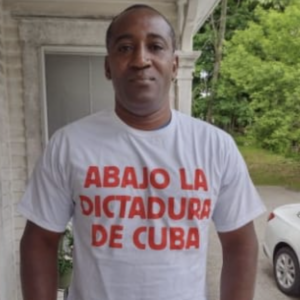 Yanovy Hondares is an asylum seeker from Cienfuegos, Cuba now living in Pembroke, N.H. As protests against the Communist regime continue in his homeland, he has a simple message for the people of New Hampshire and America:

“Abajo la Dictadura de Cuba!” (“Down with the dictatorship of Cuba!”)

While New Hampshire’s congressional delegation has remained silent on events in Cuba, local voices have spoken out on behalf of the Cuban people and against the totalitarian regime.

On Monday, New Hampshire’s only elected Cuban American, state Rep. Jose Cambrils, told NHJournal “I still have a place in my heart for Cuba and I would love to see it become a free nation.”

Cambrils left Cuba as a child and has distant memories of life under Castro. Hondares, on the other hand, is a recent arrival and knows the current conditions on the island.

“People protest because they are hungry, they do not have freedom of expression or thought,” he said. “Cuba has been deceiving the world for more than 60 years that they have good health and a good education when all Cubans know that this is a lie.

The socialist dictatorship in Cuba has had many political allies in the United States, including former President Barack Obama. He normalized relations with the Castro regime in December 2014 — though Obama waited until after the final election cycle of his presidency to do so.

Sen. Jeanne Shaheen has long supported normalizing relations with the Cuban regime, over the objections of many in the Cuban refugee community who argue those policies help keep the authoritarians in power.

When the Trump administration reversed some of Obama’s pro-Cuba policies in an attempt to pressure the regime and retaliate for its support of Nicolas Maduro’s dictatorship in Venezuela, Shaheen objected.

“New Cuba policy hurts economy, costs US jobs & is against what most Americans want. I’ll continue to urge State Dept to normalize relations,” she tweeted in 2017.

When the Trump administration suspended scheduled air service between the U.S. and all Cuban airports, except Havana’s Jose Martí Airport in response to Raul Castro’s efforts to bolster socialism in South America.

In response, Shaheen joined 11 Senate Democrats, including progressives Sen. Elizabeth Warren (D-Mass.) and Ron Wyden (D-Ore.), in a letter to the Trump administration denouncing the policy.

“This decision – which will result in the suspension of commercial air travel to nine Cuban cities – is yet another step backwards for the people of Cuba and the United States,” Shaheen and her fellow senators wrote, a sign of her continued support for normalized relations with the island’s Communist government.”

Hondares says Americans like Shaheen don’t understand the regime’s level of brutality or the desperation of the Cuban people.

“Cubans do not come to the U.S. as a matter of choice, but of necessity,” he said. “Many like me have decided to risk our lives by throwing ourselves into the sea, crossing the jungle, exposing ourselves to dangers during the voyage to get here, rather than continue living under the yoke of a totalitarian and dictatorial regime.”

Hondares says he would even be willing to support U.S. military action to liberate his homeland.

“The president of Cuba is a murderer. He has caused a civil war within the country and has already killed many people, including children,” Hondares said.

“Cuba must be free! Down with dictatorship! Homeland and life!”