Joe Biden on the campaign trail in New Hampshire during his short-lived 2008 POTUS bid.
News

When the Morning Consult poll came out earlier this week showing former Vice President Joe Biden with a 2-to-1 lead over Sen. Bernie Sanders, many politicos noted it was a national poll and, therefore, not much more than a measure of name ID. 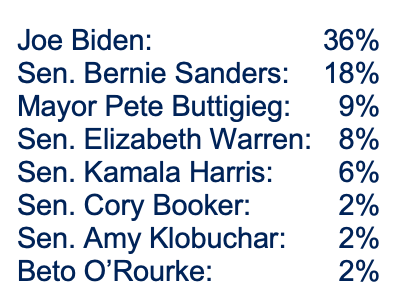 What happened to Bernie? Just a few weeks ago the UNH Granite State Poll had him at 30 percent and Biden down at 18.  He’s the candidate with the energized crowds who got 60 percent of the vote against Hillary Clinton in New Hampshire in 2016.

“I think, looking back, Bernie’s 60 percent wasn’t about Bernie. It was about Hillary Clinton,” a longtime NHDem insider and Clinton supporter told NHJournal.

In the new Monmouth poll, as in previous polls, the magic ingredient appears to be “electability.”  According to Monmouth, two-thirds of primary voters say finding a nominee who can beat President Donald Trump as more important to them than agreement on the issues. That compares to just one-third of New Hampshire Democrats who say building on Obama’s legacy is important to them.

“While Democrats may have positive feelings about Obama, the current White House occupant is a much more significant factor in the 2020 primary. In fact, it really isn’t an either-or calculation. Voters who value Obama’s legacy say the best way to preserve it is to beat Trump in 2020,” said Patrick Murray, director of the independent Monmouth University Polling Institute.

And so, as with everything else in American politics, the 2020 Democratic primary appears to be all about Trump.

Sen. Elizabeth Warren seems to believe so. She is aggressively pushing for impeachment at a time when Speaker Pelosi and the party leadership are discouraging the use of the “I” word.

Speaker Pelosi says Trump is trying to “goad” Democrats into impeachment and New Hampshire U.S. Senator Jeanne Shaheen apparently agrees. She told Politico that while pursuing impeachment could play into Trump’s hands, “the imperative now is to win the primary.” According to Politico, Shaheen believes launching impeachment proceedings doesn’t “make sense,” but it “does seem to be a popular position with the Democratic base.”

Interestingly, neither Joe (36%) Biden or Bernie (18%) Sanders have called for impeachment to begin, while Elizabeth Warren has. And some Democratic observers say it may start paying dividends.

“The most remarkable part of this poll is the extent to which Elizabeth Warren has stabilized and rebounded,” says Joel Payne, a Democratic consultant who worked on the Hillary 2016 campaign. “She’s now the top second choice of all of the candidates, and her upward momentum is continuing.

“If this continues, Elizabeth Warren might be calling herself the comeback kid in some hotel ballroom in Manchester next January,” Payne says.

On the other hand, Warren is also the only announced candidate whose disapproval number among NH Democrats is above 20 percent…and she’s losing to the mayor of South Bend, Indiana. In New Hampshire.

But the big headline is all about Biden. Even if this poll is an outlier, the fact that he’s leading in a state with virtually no African-American voters and a progressive party base shows the power of his appeal as the Trump Slayer.

As long as Biden’s viewed as the best candidate to beat Donald Trump, it’s going to be difficult for the other candidates to get past him. Someone will either have to go positive and prove they would be better at taking out Trump; or go negative and prove that Biden’s not up to the job.